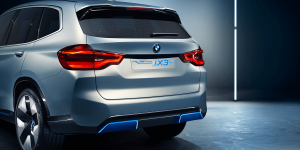 On Instagram, two photos of the BMW iX3 have appeared showing the electric SUV in the series version without camouflage. The differences between these images and the concept shown so far are minimal.

The pictures show a white iX3 that stands out from a combustion X3 with the blue accents typical for BMW i. The alleged production model is largely identical to the Concept iX3 presented in China in 2018.

One visible deviation is that the two BMW kidneys at the front are again separated by a chrome bar. This makes the iX3 look more like the combustion models, while the front of the concept was much more striking.

The Instagram account that published the two recordings seems to have been set up entirely for this purpose: The two images are the only contributions so far. At the time this article was published, the account only had two subscribers. However, sources at BMW described the content as “credible” to our German colleagues at electrive. It remains to be seen whether it is a leak or a “staged leak” to increase attention.

Production of the iX3 is scheduled to start in China this year. The electric version of the X3 has a 200 kW electric motor in the rear and will initially be offered with rear-wheel drive only. The battery has a net energy content of 74 kWh. According to earlier publications, BMW aims to enable a range of more than 440 kilometres.