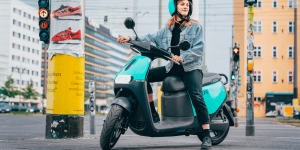 As announced, Tier Mobility added the electric scooters of the discontinued sharing service Coup from Bosch in Berlin to its fleet in May. The now multimodal offer includes, in addition to Tier’s kick scooters, the Coup seated scooters known as e-mopeds. According to the Tier announcement, the light electric vehicles will initially be deployed in the business area previously used with the electric kick scooters. The rental costs one euro starting fee and then 19 cents per minute.

However, the company leaves open in the announcement how many of the 5,000 adopted coup scooters it will use in Berlin. It will certainly not be all 5,000 vehicles, because Tier also announces that the electric scooters are to start “in the next few weeks” in two other German cities – but Tier does not want to announce the cities until the respective start date.

The fact that the vehicles from the Coup fleet will be split up among several cities (although the ratio of the three city fleets is still unknown) allows one to assume: Tier expects that the operation of 5,000 electric scooters is not economically feasible only in Berlin – even as part of a multimodal offer and with a different price structure.

“The fact that we add e-mopeds to our offering and become multimodal is a significant step in building a platform that provides end-to-end mobility solutions which are in line with demand and offer a variety of different means of transport,” says Lawrence Leuschner, CEO and co-founder of Tier Mobility. “In the current situation, the e-mopeds serve our customers as an additional means of travel, which allows for physical distancing and which can be used to cover longer distances than, for example, with an e-scooter”.

The ‘commuter ticket’ introduced by Tier should also apply to the e-mopeds. With the ticket, public transport subscribers in Germany are to receive 40 free activations, and the minute prices will still apply. With the 40 activations, it is theoretically possible to travel to and from work on a Tier e-scooter for 20 working days.