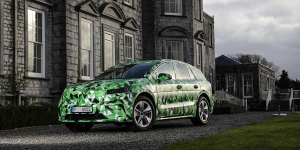 Škoda has now announced technical details for the first purely electric production model based on MEB; the Enyaq SUV. Five different performance variants (three with rear-wheel drive and two with four-wheel drive) and three battery sizes will be available.

The entry-level model is the Škoda Enyaq iV 50 with a rear-mounted 109-kW electric motor and a battery with a gross capacity of 55 kWh (net usable: 52 kWh), which should enable a range of up to 340 kilometres. The next variant is the Enyaq iV 60 with 132 kW output and a 62 kWh battery (net: 58 kWh), which according to Škoda can cover up to 390 kilometres. The Enyaq iV 80 with 150 kW output is the most powerful of the three rear-wheel-drive versions and offers a WLTP range of up to 500 kilometres with its 82 kWh battery (net: 77 kWh).

The 82 kWh battery is also used by the two versions that are equipped with a second electric motor and thus four-wheel drive: the 80X and the vRS, which deliver 195 kW and 225 kW respectively. The maximum range of both four-wheel-drive versions is up to 460 kilometres.

The smallest battery of the Enyaq iV 50 is interesting in this context: so far, no battery with 52 kWh net been mentioned in other MEB models. In the ID.3 the Pure model comes up to 45 kWh net (48 kWh gross). The middle variant ID.3 Pro corresponds to the Enyaq iV 60 (62 kWh gross, 58 kWh net) and the battery of the ID.3 Pro S corresponds to the one from the 80’s or RS models of the Enyaq (82 kWh gross, 77 kWh net). While the ID.3, according to the previous VW specifications, always reaches an output of 150 kW (regardless of the battery size), Škoda has staggered the output with 109 kW, 132 kW and 150 kW for the single-engined versions.

The Czech Volkswagen subsidiary describes the car’s charging capacity with “up to 11 kW” AC and with “up to 125 kW” DC. In the basic version, the Enyaq iV does not have a three-phase onboard charger – even the ID.3 Pure only has a two-phase charger with a maximum of 7.2 kW. Škoda has chosen a similar gradation for the DC charging power as VW did for the ID.3: The version with the smallest battery only manages 50 kW, the 58-kWh battery 100 kW and the 77-kWh version manages the maximum specified 125 kW.

Unlike the ID.3 and the announced MEB models Seat el-Born and Audi Q4 e-tron, the Enyaq iV is not built in Zwickau. Production of the purely battery-electric SUV based on the modular e-drive system (MEB) is scheduled to start at the Škoda main plant in Mladá Boleslav on a line with MQB models at the end of 2020. The production model is to be presented before the end of this year, and advance sales are also to start with the premiere. Škoda has not yet revealed prices. There will be a specially equipped and optically differentiated “Founders Edition” at the start, which is limited to 1,895 units – in reference to the year of foundation.