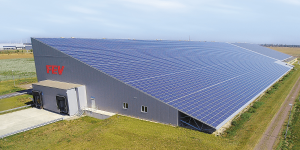 The 12,000-square-meter complex is well located in the triangle between Halle, Dessau and Leipzig. The building will house facilities for the electrical testing of modules as well as complete high-voltage batteries for passenger cars and commercial vehicles.

The setup at eDLP includes 54 climate chambers with an electrical output of 30,000 kW and a cumulative volume of around 600 cubic metres. A unique selling point of the test facility is what FEV calls the 350 kN shaker with a climate hood – a tool for combined mechanical and electrical tests with ambient conditions ranging from -40 to 100 degrees Celsius.

The Aachen-based FEV announced the centre starting operations this year with the superlative claim that the centre will be “the world’s largest development and test centre for high voltage batteries for passenger and commercial vehicles.” The state of Saxony-Anhalt is supporting the project with over 6 million euros.

Professor Dr Stefan Pischinger, CEO of FEV Group, says: “This strategic investment will enable us to offer our customers a globally unique development service for passenger and commercial vehicles at one location. All common test methods for batteries are covered – in life expectancy, environmental and transport tests, as well as crash safety for cells, modules and packs”.

In addition to the climatic chambers, the building has four bunkers, a fire hall and an adjacent dismantling and diagnostic workshop. According to FEV, this covers all standard test methods for cells, modules and packs, and consequently, all tests required to achieve series-production readiness.

The eDLP expands FEV’s existing e-car testing expertise in the region: Only nine kilometres away, the service provider operates seven purely electric and over ten hybrid powertrain test benches in its Endurance Test Center (DLP). The opening of the battery development centre will create almost 100 new jobs in the region.

The energy required for the tests will be provided almost entirely by regeneratively generated electricity. This is guaranteed by the centre’s somewhat striking roof surface that is completely covered with photovoltaic panels and has a power capacity of over 900 kW.

FEV already has relevant experience in setting up test and development centres. In March, the company opened the Centre for Advanced Low-Carbon Propulsion Systems (C-ALPS) in the English city of Coventry together with Coventry University. In 2018, FEV expanded its battery test centre near Paris and added a new test centre to its site in Alsdorf to complete emission and range tests following the latest global regulatory standards. The company is by no means eurocentric – in 2018 FEV also set up a Thai subsidiary in order to offer its engineering and development services in Thailand, where international attention is turning into a hub for battery production and expertise in South East Asia.

Update 26 September 2019: FEV has officially opened the high voltage battery development centre ‘eDLP’ in the German state of Saxony. There, on a 15,500 m² complex, performance and electrical tests are to be conducted including aspects such as environmental and mechanical impacts and abuse. The battery cells, modules and packs will be tested in a range of conditions with climate reproduction systems simulating temperaturs from -40°C to 90°C. Power for the centre will be drawn for the neighboring 12,000 m² photovoltaic system.