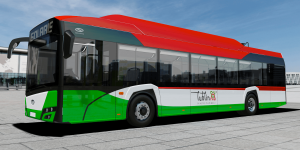 The Polish city of Lublin has ordered further electric buses from Solaris. The order from the municipal transport operator ZTM comprises a dozen Solaris Urbino 12 electric. This is the second order from Lublin within a few months for the Polish manufacturer.

By the end of 2019, Lublin had ordered 20 battery-powered buses and 15 trolleybuses including charging infrastructure. The vehicles from the current order are to be delivered by mid-2021 – seven of the new e-buses by the end of 2021, the remaining five in the first half of 2022. According to Solaris, the total value of the contracts, which include the delivery of the buses, seven battery chargers and after-sales service, amounts to over 8 million euros.

ZTM has opted for the version with 116-kWh Solaris High Power batteries, adapted to frequent and fast charging that can be recharged by opportunity charging on the road using pantograph quick-chargers. There are also plans to install photovoltaic cells on the roof of the vehicles to power some auxiliary units and thus optimise the vehicle’s overall energy consumption.

The Urbino 12 electric can accommodate 70 passengers, 27 of whom are seated. Double USB sockets for charging the passengers’ mobile devices will be installed on these seats, and the buses will also be equipped with a modern passenger information system with video surveillance and passenger counting sensors.

These ordered vehicles will be equipped with batteries with a total capacity of over 150 kWh. The energy drives a central electric motor with an output of 240 kW. The charging process, which takes a few minutes, is made possible by a pantograph on the roof of the bus. The buses can also be recharged at night in the depot via a plug.