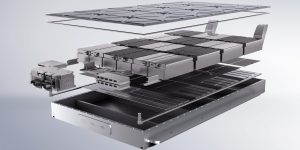 The EV safety standard, which like all three standards has been formulated by the Chinese Ministry of Industry and Information Technology (MIIT) and approved by the State Administration for Market Regulation (SAMR) and the Standardization Administration Committee (SAC), mainly formulates the requirements for the electrical and functional safety of electric vehicles.

One of the new features is that the battery system must warn the driver of “thermal accidents”, i.e. an imminent battery fire when the battery is damaged. In addition, requirements were specified with regard to waterproofing, insulation and system control. The new standard also describes the prescribed test methods in more detail.

The new standard for battery safety also deals primarily with “thermal accidents”. Among other things, it specifies that the thermal passage of a cell for five minutes must not cause a fire or explosion of the vehicle. This should give the occupants sufficient time to leave the vehicle. In addition, further requirements have been established for the cells and modules, which are intended to increase thermal safety. Battery tests should include external fire, mechanical shock, simulated collision, short circuits, overcharging and excessive temperatures.

Stricter requirements have also been set for the electric buses due to the high number of passengers and battery capacity with regard to collision safety, the charging system and the tightness of the batteries and the vehicle. High-voltage components must be particularly resistant to fire, and specifications were also specified for the thermal continuity of the cells.