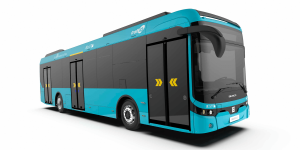 The Dutch manufacturer Ebusco will deliver 13 new electric buses to Frankfurt am Main for operator Transdev Rhein-Main at the end of this year to replace the current diesel buses. These are the 12-metre long Ebusco 2.2 low-floor versions.

According to the Dutch, Ebusco was awarded the contract by Transdev for the 13 electric buses because of the “long-range of the buses”. The Ebusco 2.2, as a 12-metre version, should be able to cover up to 350 kilometres with its 350 kWh battery. Optionally, the Ebusco 2.2 is also available as a 12-metre version with 400 kWh for a range of up to 450 kilometres. Both versions offer space for up to 90 passengers. The 18-metre version is available with a 350 kWh or 500 kWh battery. Up to 130 passengers have space in this version.

Also in its home market, Ebusco was awarded a contract by Transdev Netherlands last October to supply no fewer than 156 electric buses. These are to be used in the Amsterdam area from November 2020.

Over in Germany, Transdev Rhein-Main with the Alpina brand was awarded the contract to operate the A and G line bundles from December 2020 by the municipal authority traffiQ after a Europe-wide tender only in February. A total of 25 electric buses are to be deployed from the end of 2021.

Besides, Ebusco is not the only supplier to help electrify Frankfurt’s public transport. The operator In-der-City-Bus GmbH (ICB) already announced that it had ordered eleven electric buses, which are to operate in city on the river Main from the end of this year. The bus operator will receive nine Irizar articulated electric buses from Ferrostaal Equipment Solutions GmbH. Another two single-deck electric buses will come from the Portuguese manufacturer Caetano.

The fleet conversion to zero-emission is taking place against the background of the decision made in the city parliament to replace the Frankfurt diesel bus fleet with vehicles with alternative drive systems by 2030.