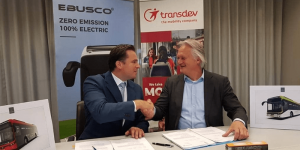 The Dutch manufacturer Ebusco has received a 130 million Euro order from Transdev Netherlands to supply 156 electric buses on its home market. These will be deployed in the Amsterdam area from November 2020.

The new low-floor electric bus fleet will start operating under the Transdev Netherlands Connexxion brand and will operate in the Amsterdam region, around Schiphol Airport and downtown Haarlem. The Ebusco models replace the conventional buses previously used there.

“We are applying the latest technology and innovations in our buses like weight reduction, battery technology, heating or charging infrastructure,” says Ebusco CEO Peter Bijvelds. The Dutch use lithium-iron-phosphate batteries (“LFP technology”) to store energy. The combination of both – the rechargeable batteries and the innovative technologies – enables the bus to cover a range of up to 350 kilometres.

The order for 156 electric buses is now a real feat of strength for Ebusco: “This is an enormous challenge that we are tackling with both hands,” says Bijvelds. According to Bijvelds, it is “the largest fleet ever delivered to new electric buses in Europe within a year”. It was only in March that Ebusco also received an order within the Netherlands for the delivery of 66 electric buses. Qbuzz, the public transport operator in the Dutch provinces of Groningen and Drente, ordered a total of 160 electric buses, 66 of which were Ebusco buses, 45 VDL buses, and 55 Heuliez buses.

Meanwhile, Ebusco is presenting the third generation of its electric bus at Busworld in Brussels as of today. Thanks to a further weight reduction of 33 per cent, the Ebusco 3.0 is expected to travel up to 500 kilometers on one battery charge. Since the model with its long-range is to be charged with one battery charge throughout the day, there is no provision for quick charging via current collectors – the Ebusco 3.0 is designed from the outset for overnight depot charging.