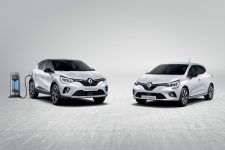 The All-New Captur Plug-in Hybrid has been given a new petrol-electric powertrain. Renault UK says this makes it the most powerful, efficient and economical car in the range. A petrol-hybrid set up has been given to the All-New Clio Hybrid which the company says has an economical hybrid drivetrain capable of “completing most urban journeys in zero-emissions electric mode”.

The new PHEV and HEV variants benefit from technology shared across the Alliance (the 1.6-litre engine and two electric motors, plus clutchless gearbox), and features technology the company says has been influenced by the Renault Formula One Team. Now, the All-New Captur and All-New Clio E-TECH models can recuperate energy lost during braking and deceleration. Both All-New Captur and All-New Clio models have E-TECH design details on the exterior and interior to differentiate from the rest of the line-up.

The Captur Plug-in Hybrid uses a 1.6-litre petrol engine alongside a 9.8kWh battery driving two electric motors, enabling an all-electric driving range of 30 miles (WLTP) and total power output of 160hp. Top speed in purely-electric Pure mode is 84mph, with an acceleration from zero to 62mph in 10.1 seconds. The Pure mode is a new mode specific to the Plug-in model and allows for all-electric driving when the battery is sufficiently charged for up to 30 miles. For fossil-fuelled power, Sport mode makes full use of both petrol engine and electric motor for faster responses thanks to the electric motor but only when there is sufficient charge, and the company cites overtaking manoeuvres as the kind of circumstances for which one would need more power. The E-Save function limits use of the battery and saves energy for it to be utilised later (presumably in emission-free zones or in more traffic-dense areas) by prioritising use of the petrol engine.

A free 7kW wallbox home charger, supplied and fitted by BP Chargemaster is included as standard for retail customers. With this, the All-New Captur Plug-in Hybrid can charge from zero to 100 per cent in approximately three hours. Both a domestic charging cable and Type 2 charger is provided as standard.