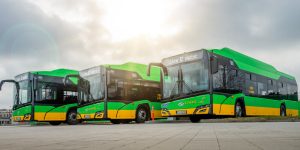 Solaris announced an electric bus order from Poznań, Poland: MPK Poznań has ordered 37 electric buses, which are to be delivered in the second half of 2021. The first 31 of them are 12-metre solo buses, the remaining six comes as articulated 18-metre buses.

The new electric vehicles complement the 21 Solaris electric buses ordered at the end of 2018, which have already been in service in Poznań for several months. At that time, the ratio between solo and articulated buses was reversed: six Urbino 12 electric were joined by 15 Urbino 18 electric. Now the majority of the order is for the twelve-metre bus.

Solaris estimates the net value of the order at 90 million zloty, the equivalent of slightly more than 20 million euros. “It is not even a year since the first electric buses arrived in Poznań and we are already ordering more,” says Jacek Jaśkowiak, Mayor of the city Poznań. “This is an expression of consistent efforts of the city and the Poznań city operator to improve the living conditions more and more”.

Based on the experience gained so far, MPK Poznań has decided to use relatively small battery packs. The Urbino 12 electric will be equipped with four modules, giving the buses a capacity of 120 kWh. The Urbino 18 electric articulated bus will have six modules with 180 kWh. The city already has two pantograph rapid chargers from the previous order, which will also enable the new electric buses to be quickly charged during the day. According to the Solaris announcement, further fast chargers are to be installed at the two locations in the future. In addition, the Górczyn bus station and a depot will be equipped with chargers for overnight wired charging.

Compared to the electric buses that have been in use so far, Solaris says that it now uses a SiC voltage converter, which, using silicon carbide technology, should reduce the vehicles’ energy consumption. Otherwise, the buses from the new order are equipped “similarly to their predecessors”, the manufacturer said.

Vestas to electrify company vehicles around the globe