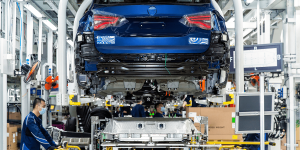 BMW has given a new interim result for the market launch of the iX3. The test procedures required for homologation were completed and the results sent to the approval authorities in the most important automobile markets.

According to BMW, preparations for the start of production of the all-electric iX3 are proceeding according to plan. As the carmaker writes in a press release, the homologation test program, which included test drives of more than 7,700 kilometres, has been completed.

Now it is up to the authorities to issue the relevant approvals and to set the official consumption values. As these approvals are not yet available, BMW continues to use preliminary data for the range of 440 kilometres determined according to the WLTP.

“This is the first time we have completed the entire homologation process for a fully electric model in China and Europe at the same time,” says Arno Keller, Head of Development for the iX3. “The staff on our testing team mastered this unique challenge with tremendous dedication and efficiency.”

The Group sees this as paving the way to series production, which is scheduled to begin in late summer as planned for the world markets at the BMW Brilliance Automotive (BBA) joint venture in China. BBA has been producing pre-series BMW iX3 vehicles at its Dadong plant in Shenyang since the middle of last year. The 200th pre-series model has just rolled off the production line.

The iX3 is manufactured together with the conventionally powered X3 on a single line to achieve what BMW calls “high efficiency and flexibility in production”. “We are right on schedule with the production of the BMW iX3 pre-series vehicles and will start serial production in late summer,” says Robert Küssel, head of the BBA plant in Dadong.

BMW has not yet announced the exact market launch and prices of the iX3. The communication merely states that the first vehicles are to be delivered to customers this year – but not whether they will be European or Chinese customers.