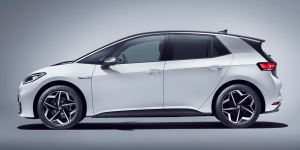 VW has published the prices for the ID.3 in the limited First Edition with the start of the order process for reservation holders. The currently cheapest version ID.3 Pro starts at a list price of €39,995, and after deducting subsidies, the price drops below €29,500.

The two other available trims of the VW ID.3 special edition have prices starting at 45,995 euros (Pro 1st Plus) and 49,995 euros (Pro 1st Max). However, with a base price of just under 40,000 euros, VW is at the upper end of the price range announced for the First Edition of the debut MEB electric car.

The actual sales price depends on the expected subsidy. A sales document on the Internet, dated 16 June 2020 regarding Germany, lists the currently valid manufacturer’s share of the German environmental bonus of 3,570 euros, to which the state would add 3,100 euros (3,000 euros environmental bonus and 100 euros AVAS subsidy) – making 33,325 euros for the ID.3 Pro 1st.

If the measures of the economic stimulus package that have been announced in Volkswagen’s home country but not yet come into force are included, the price continues to fall. On the one hand, only 16 instead of 19 per cent value-added tax is now payable, which means that the manufacturer’s share of the total is falling to 3,480 euros. For this, the state adds a total of 6,100 euros, resulting in a base price of 29,407 euros. An analogous calculation for the ID.3 Pro 1st Max then results in an amount of 39,155 euros instead of the 49,995 euros.

However, the First Edition cars are only available for pre-orderers, who can now convert their reservation into a binding order. The open sale is to start in July as reported. Test drives at the dealerships are expected to be possible from August.

Pre-orderers still have the choice whether they want to receive their electric vehicle in September, but will have to do without some of the functions. According to VW, cars to be delivered later in the fourth quarter are to be given all features, whereas earlier vehicles will have to be given the functions then during a visit to the workshop. According to a VW announcement last week, this affects only two features, but they have not yet been wholly programmed: The remote area of the head-up display of the Max outfit and the smartphone connection ‘App-Connect’. According to a report in the German publication Spiegel, the automatic parking system and the module that enables over-the-air updates are also still missing. The pre-bookers who want to take over their ‘incomplete’ vehicle in September will also become members of the ‘First Mover Club’. Because of the inconvenience with the software, the first three instalments will be waived for these customers.


In the First Edition the currently four available lacquers are all without extra charge (moonstone grey as unilacquer as well as glacier white, Makena turquoise and manganese grey as metallic) with black roof. Further options are not provided in the limited exclusive model. All variants feature the 58 kWh battery (up to 420 kilometres according to WLTP) and the 150 kW electric motor in the rear. The customer must then choose between the three equipment options and the four paint colours. Pro 1st customers automatically receive Platinum Grey fabric seats, while Plus customers can choose between different interior designs. With the Max, on the other hand, the interior space is predetermined again.

In the interior, all versions of the ID.3 (even after the First Edition) are equipped ex-works with air conditioning, and the heat pump is currently only available in the Max version. A ten-inch touch screen is also standard. However, VW product manager Christine Leuderalbert promises that the touch screen operation has been optimised and is easy to use – even for fans of haptic keys.

Volkswagen gives an eight-year warranty on the battery or up to 160,000 kilometres. The limit value was set at 70 per cent of the original capacity.

VW does not yet mention prices for the later equipment and battery versions after the First Edition. They are to be published at the start of each order – so probably in July. VW wants to pass on the announced reduction in value-added tax by the end of the year directly to the customer. However, the decisive factor for VAT is the date of delivery – so pre-bookers who order the vehicle in June but receive their vehicle in September can expect to pay 16 per cent VAT.

Pricing for the left-hand-drive version for the UK are not yet available but the email waiting list for the VW ID.3 1ST is open here.