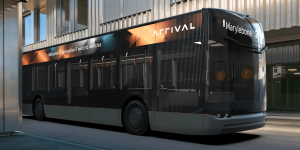 The English vehicle developer Arrival, previously known primarily for electric delivery vans, has presented the concept of an electric bus. The Arrival Bus is to be manufactured in local micro-factories designed for the assembly of all Arrival vehicles.

Apart from the images, Arrival provides little data regarding the vehicle – neither the length of the bus, nor the battery capacity, range or drive power are known. At a glance, the bus could fall into the popular 12-meter class – but this has not been confirmed. Nor does the London-based start-up provide any information on passenger capacity.

The latter possibly happens for a good reason, as the interior of the Arrival bus is intended to be quite variable. It should be easy to convert seats and support bars – for example to convert a two-seater bench into a single seat, and the distances between the rows of seats are made to be adjustable and deployable shelves are included in the design. In times of the Covid-19 pandemic, the company claims that the bus is equipped with features that “promote a positive perception of public transportation and create an environment evoking a sense of space, cleanliness and wellbeing in a world with a heightened awareness of hygiene and personal space.”

Of course, it remains to be seen whether public transport companies really make use in practice of the possibility to change the seating configuration in their vehicles. Or whether it simply simplifies production if the interior is based on a modular system.

As with other Arrival models, production is to take place in local micro factories. The vision is that the vehicles can be produced in the respective micro factories in a market-specific manner and adapted to the local supply chains. Since the micro factories are supposed to be able to produce all rival models, this should also strengthen sales: If you build a factory because of the electric bus, you can later also manufacture the electric transporters for delivery services there, as the logic goes. By 2026, the British company wants to set up 1,000 micro factories worldwide.

For the time being, however, a central plant still has to be set up: As reported, Arrival had moved into a plant in Bicester in March, where, among other things, the electric delivery vans are built from the large UPS order of at least 10,000 vehicles. Earlier this year, Hyundai and Kia invested 100 million euros in the British electric vehicle developer.

Although the focus will probably be on the electric transporter for the time being in view of the large orders, Arrival is pleased to “bring the Arrival Bus to markets all over the world and make the passenger experience in bus transport positive”, according to the announcement. “By working in partnership with businesses to develop the entire ecosystem around our vehicles, we are supporting their goals of making Public Transport appealing whilst achieving carbon neutrality,” says Ben Jardine, Product Director for Arrival Bus. However, Arrival has not yet settled on a date when the bus is to be launched on the market.