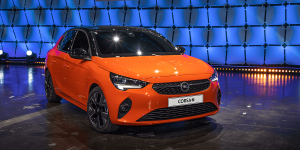 For the first time, Opel is offering a purely battery-electric vehicle with the new sixth Corsa generation. The Corsa-e can now be ordered starting from 29,900 euros. Deliveries are scheduled to start in spring 2020.

In addition, the order books have also been opened for the Grandland X as a plug-in hybrid. In 2020, two further all-electric models will be added – the successor to the Opel Mokka X and the Vivaro.

The German company offers a total of three versions of the electric Corsa. The basic version “Selection” makes the entry at a price from 29.900 euros. The next higher “Edition” version costs from 30,650 euros. The Corsa-e “First Edition” can also be reserved immediately, starting at 32,900 euros or from 299 euros monthly in leasing.

Technical details of the BEV were released in advance. Like the Peugeot e-208 and the DS 3 Crossback E-Tense, the small car is based on the e-CMP platform developed jointly with Dongfeng, which lays the foundation for purely electric vehicles in the B and C segments. The Corsa-e has a power output of 100 kW and 260 Nm torque. The electric car can accelerate from 0 to 100 km/h in 8.1 seconds and has a range of up to 330 kilometres according to WLTP.

The liquid-cooled battery, which is housed in the vehicle floor and has a capacity of 50 kWh, can be recharged within around five hours at an AC charging station. Opel relies on three-phase charging with up to 11 kW, which is possible in Germany from the Edition version onwards. The newcomer can also be ordered with a single-phase 7.4 kW onboard charger for countries in which 3-phase power supply is less common in households than, for example, in Germany. On DC columns, the battery should reach 80 per cent of its capacity again within 30 minutes. But only if the charging station provides up to 100 kW. The Rüsselsheim-based company provides an eight-year guarantee for the battery.

The Selection features of the Corsa-e already include an automatic climate control system with remote control, electric parking brake, keyless starting system and the Apple CarPlay and Android Auto compatible multimedia radio with a 7-inch colour touch screen. There are also systems such as the front collision warning system with automatic emergency braking and pedestrian detection as well as the lane departure warning system at no extra charge. With the myOpel app, the charging status can be checked from anywhere, so that the traveller can always optimise charging time and costs.

In addition to the Grandland X Hybrid4, Corsa-e and Ampera-e, which continues to be available in various markets, the manufacturer will introduce the new Zafira Life (from 2021), the new Vivaro allrounder for commercial vehicles and the successor to the Mokka X – each model also available as a purely battery-powered version. All European passenger car series from Opel will also have at least one electric version by 2024.

The parent company PSA is also preparing the transition into the electric age: By 2025, the carmaker intends to offer offshoots with electric or hybrid drive for all 40 models of its brands. It will start in 2019 with purely electric versions of the Peugeot e-208 and the DS 3 Crossback. An e-version of the Peugeot 2008 is to follow in 2020. PSA’s plug-in hybrid offensive will start in 2019 with a corresponding offshoot of the DS 7 Crossback, the PHEV versions of the Peugeot models 3008 and 5008, the Citroën C5 Aircross and the Grandland X mentioned above.

BMW & JLR to cooperate on development