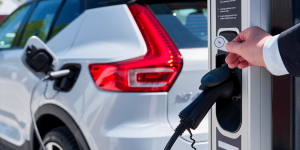 Drivers of Volvo’s electric cars can use the PlugSurfing app to search for, access and pay for charging points near them or when travelling throughout Europe. Volvo says that every all-electric Volvo Recharge model in Europe will automatically include a PlugSurfing account in the future. The XC40 Recharge P8 AWD is the first BEV of the current generation of Volvo models and should be launched towards the end of the year.

As Volvo Car Germany confirmed in response to questions from electrive, the current campaign is focussing on all-electric models. A spokesperson said that they are still checking whether there will be a similar offer for plug-in hybrids. For the PHEV, Volvo refers to the leasing offer, where corresponding vehicles can be leased from NewMotion including a wallbox. In addition, Volvo will pay for one year’s Fahrstom for all PHEV models ordered from one of the German brand dealers, for example, until September 30, 2020, but only under certain conditions.

With the PlugSurfing offer, additional contracts with Charge Point Operators (CPOs) will be eliminated, since the Berlin-based company, as a charging network provider, combines many charging stations from different suppliers on one platform. When the Polestar deal was announced at the beginning of June, for example, there was still talk of 195,000 charge points, but a few weeks later there are already “over 200,000 charge points”. PlugSurfing says that every week the network expands with the addition of new CPOs, which means that the selection of available charging points for drivers is constantly growing. At the moment there are over 630 CPOs.


At the same time, there is currently no uniform price for PlugSurfing, meaning that the customer has to find out the conditions for charging at a specific station before charging in the app. These can vary greatly depending on the CPO. The charging processes are registered in the app and billed monthly. The app also offers real-time availability and the charging performance of the stations. As Volvo relies on an Android-based infotainment system for the XC40 Recharge (as with the Polestar 2), it should also be possible to call up this information directly in the vehicle.

“Our PlugSurfing service will cover all your charging and driving needs: the daily commute, on-location charging and long-distance travel,” says Björn Annwall, Head of EMEA at Volvo Cars. “Together with Volvo Cars, Plugsurfing has a strong vision for sustainability and making car charging easy,” said Anne Jalkala, CEO of PlugSurfing. “By working together with Volvo Cars to drive electrification of mobility and connect drivers to energy, we aim to make zero-emission mobility a reality for future generations of drivers.”

Volvo says that the PlugSurfing account can also be used to add other charge-related services at a later date. This might include the ‘PlugSurfing Plus’ offer. For a monthly subscription, PlugSurfing will then offer fixed rates per kWh instead of the CPO-based prices. According to the PlugSurfing website in Germany, the service costs 19.99 euros per month and then 0.34 euros per kilowatt-hour, including at Ionity columns.