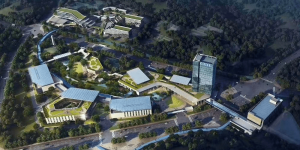 CATL has begun construction of an innovation laboratory at its headquarters in Ningde in the eastern Chinese province of Fujian. The laboratory, named 21C Lab, will focus on the development of next-generation batteries and new energy conversion systems.

CATL has announced that some 3.3 billion yuan (around 410 million euros) will be invested in the 21C Lab that will see the further development of metal lithium batteries, pure semiconductor batteries and sodium-ion batteries, but also on the commercial exploitation of its technology. This includes the development of reliability models for lithium-ion batteries as well as non-destructive testing technology. The company expects the laboratory to be operational by the end of 2021.

With encouraging words from 2019 Chemistry Nobel Laureate Prof Dr John B. Goodenough who said that the centre “should allow CATL to introduce more inventions in battery technology that will allow the world to cut back on our dependence on fossil fuels,” he wrote in his congratulatory letter. It seems in the race to bring out commercially viable new battery solutions, the Chinese battery-making giant is hoping to attract international talent to the research centre. In their press release, CATL says that the centre is “expected to attract thousands of experts and talents within five years.”

Just recently, in the concerted European effort to earn a competitive edge in the battery market dominated by Asia, the EU-funded project COBRA (CObalt-free Batteries for FutuRe Automotive Applications) aims to develop next-generation cobalt-free batteries. The project also seeks to eliminate the need for other critical materials and is, of course, focussed on directly commercialising the results through the industrial partners involved in the project. Also in Europe, keen to reduce its reliance on battery giants such as CATL, a new EU project called ASTRABAT has been created to push forward with the development of solid-state battery cells. The project aims to create such cells for electric vehicles and other applications in Europe. The project consortium comprises 14 partners from eight European countries.

Back in China, the innovation centre is not the only construction project from CATL in Ningde. For up to 10 billion yuan (the equivalent of around 1.3 billion euros), a battery cell factory is to be built at Cheliwan Pond in two years. The company is also building a new cell factory in Yibin. Construction of the European cell factory near Erfurt began in October 2019. In total, CATL plans to build 52 GWh of new battery cell production capacity.