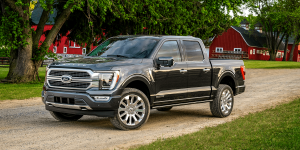 Ford presented the new edition of its US customer F-150, which is now being offered with a full hybrid drive for the first time. For the promised fully-electric version of the pickup, interested parties may have to wait for up to two years.

The hybrid drive of the pickup truck combines a 3.5 litre V6 with a 35 kW electric motor and a battery with a storage capacity of 1.5 kWh. The drive, called PowerBoost, is to be available in all equipment variants from the F-150 XL to the Limited. Ford has not yet revealed prices.

The electric engine is located in the housing of the 10-speed automatic transmission, the engineers have placed the liquid-cooled battery on the frame under the platform. This way, neither the interior nor the loading area should be affected. The electric motor takes over another task in addition to the drive: It can also be used as a generator and thus generate electricity for the F-150’s sockets while the combustion engine is running. The connections called ‘Pro Power Onboard’ are intended to enable the self-sufficient use of tools, for example. The system can optionally deliver up to 7.2 kW (240 volts, 30 amps), ex works it is 2.4 kW.

According to Ford, special software was developed for the transmission including the electric motor, which has been optimised for use in pickup trucks. For example, the software is intended to help customers use a special towing mode to pull heavy trailers better and manoeuvre them more precisely. The maximum towing capacity of the new F-150 is specified at 12,000 pounds, the equivalent of 5.44 tonnes.

With the generation change, Ford also offers some driving assistants in the F-150, such as an improved intersection assistant. The vehicle is also prepared on the hardware side for a semi-autonomous driving assistant called ‘Active Drive Assist’, although the software for this is not expected until the third quarter of 2021. It will then be installed either over the air or at the dealer.

In December, Ford announced investments of around 700 million US dollars in its Dearborn plant in order to prepare the factory in the US state of Michigan for production of the electrified variants of the F-150, among others. In the current announcement, Ford has made no mention of the BEV version of the F-150. At the signing of the cooperation agreements with VW about two weeks ago, Ford-COO Jim Farley still stated that regardless of the plans with VW’s MEB, a fully electric Transit and F-150 will be brought to market in the next two years.

Byton may be facing bankruptcy