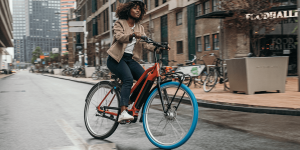 In addition to the revised and redesigned e-bike Power 7, Swapfiets will gradually offer a foldable electric kick-scooter called e-Kick and is currently testing the electric moped scooter e-Scoot from NUI. The Dutch company includes all costs in the framework of a monthly subscription such as repairs within 48 hours, licence plate and insurance. Founded in the Netherlands in 2014, the company calls itself a Bicycle-as-a-service provider. The business idea is that for a monthly fee, subscribers receive a bicycle or light electric vehicle of their choice for their use. This micromobility offer has nothing to do with sharing insofar as the subscribers take the bike or scooter home with them.

As of June, Swapfiets counted over 200,000 members in the Netherlands, Germany, Belgium and Denmark. Around a quarter of this is in Germany, where the provider is active in 30 cities whereby around half of all members registered in Germany come from the four major cities of Berlin, Hamburg, Cologne and Munich.

In terms of fleet diversification, the e-Kick scooter is already available in various cities. At the same time, the e-Scoot developed by NUI is still being tested and is currently “only available to a limited extent in Berlin”. All available vehicles per city can be viewed via an app or on the company website. Despite the diversification into electric kickscooters and electric moped scooters, Swapfiets emphasises that the bicycle is and will remain the most efficient, sustainable and environmentally friendly solution in the mobility mix. “Consequently, Swapfiets continues to focus on bicycles, but at the same time it is responding to the increasing demand from municipalities and commuters for innovative electric vehicles that provide public transport with flexible transport solutions for the first and last mile (…),” says the head office. All of the company’s bicycles are recognisable by means of a striking blue front tyre as a trademark.