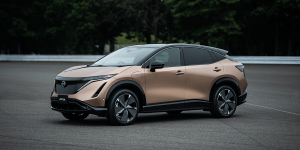 Nissan revealed the new all-electric model in Japan today, deeming the Nissan Ariya crossover “to mark a new chapter” for the company’s electric vehicles to come. Indeed, the most dearly missing features in its other EV have received an overdue makeover.

Nissan is determined to turn a new leaf (pun intended) with the launch of the Ariya crossover set to hit Europe by mid-2021. The production version of the new e-SUV made its virtual debut at the soon-to-open Nissan Pavilion in Yokohama, Japan, today.

Nissan admits it is “heavily based” on the 2017 IMx concept which had been seen as nearer-series version again in 2019. Already called Ariya, the eSUV with bold lines already featured the “bespoke platform” as Daniele Schillaci, Nissan’s executive vice president for global marketing and sales revealed back then. Also the digital roundtable we took part in today, product developer Marco Fioravanti mentioned the idea was from 2016. Rather than to “benchmark premium competitors” – think Tesla Model Y, VW I.D.4, Ford Mustang Mach-e or BMW iX3 – Nissan wanted to set their standards, guided by customer needs, stressed Fioravanti.

Four years later, this new architecture is to serve the entire alliance, that is Renault eventually and primarily Nissan in Europe. Considering the Alliance’s recent restructuring announcements, the latter focus comes as a surprise. Nissan was to concentrate on the Asian and North American market with rumours going as far as to say they would withdraw from the continent. However, Fioravanti put the Leader-Follow-Approach in a more relative light. Said Fioravanti: “Just because Renault has been named the leader in this region, does not mean that Nissan has given up.”

He also emphasised that the Ariya is “the first EV on this new platform” indeed. So for now, it will be Nissan leading the C-Segment platform. More so, Nissan has “no plan to reduce our model range in Europe,” Fioravanti said, adding that “it will be the opposite” once the Ariya arrives.

Only for electric cars, however. Asked why the company chose to opt for this EV-only approach for its new architecture rather than the multi-energy approach such as PSA for example, Firoanti told electrive: “Yes, it would have been much cheaper to do a multi-energy use platform.” However, it is not “masochism” on Nissan’s behalf, he said, but dedication to a platform that “allows us to take the customer approach and push the wheelbase to an extreme level.” An investment that they hope will be “fully recognised”. Nissan calls this “Timeless Japanese Futurism” both in technical as well as visual terms.

We will get back to the design a bit later. First, however, Nissan finally revealed data on the actual drive technology. As suggested before, the Ariya utilises a new drive called e-4ORCE. There is an all-wheel-drive and also front-wheel-drive-only variant — two in fact when taking the two battery versions of 63 kWh and 87 KWh into account. Nissan is quoting the useable capacity here not the gross that is at 65 and 90 kWh respectively.

The combination of two motor set-ups and two batteries brings the Nissan offer to five core models in Europe, including one Performance option.

The Ariya 63kWh two-wheel-drive model targets urban commuters with an output of 160 kW and a top speed of 160 kph. Nissan claims a range of 360 km for the entry model. Interesting, the next trim, the Ariya 87kWh in the 2WD set-up has the most extended range of all the variants with 500 km and has a 178 kW output.

Only in the 4WD set-up, Nissan will offer the 87 KWh Performance version. It features the highest output with 290 kW powertrain and but compromises slightly on the range at 400 km due to the higher power. Said power serves for acceleration from 0-100 kph in 5.1 seconds, 0.6 seconds faster than the next strongest variant. The standard 87 kWh EV with AWD claims 460 km, while the smaller battery in the AWD version is to last for 340 km. All come at a top speed of 200 kph. 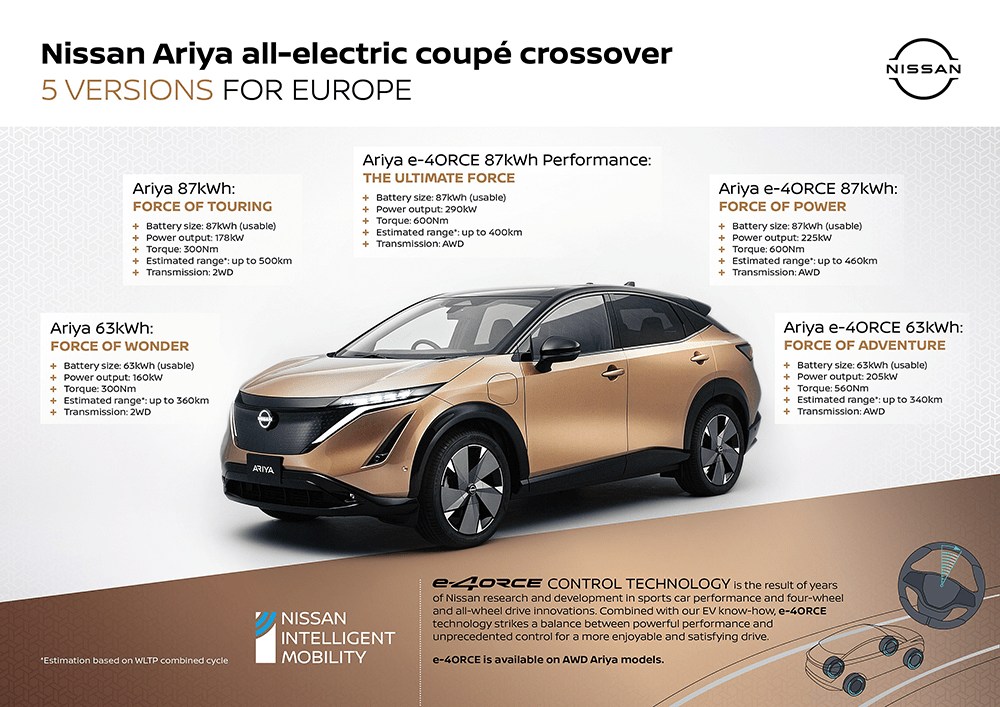 Given this reasonably impressive spec, it becomes clear why Fioravanto considers the Ariya and Leaf “fully complementary,” and targeting two different segments of the market. He described these as the Ariya moving up in the food chain if you like, serving as the “first car in the household” (and making the Leaf the second).

Talking about moving up in the world – the new battery in the Ariya is Nissan’s most awaited and expected clue. It is finally liquid-cooled, something that has been missing dearly in all previous Leaf updates. Again Fioravanti points out that they have listened to customers and makes a plea to the press to establish a point Nissan is wanting to make: “We are simply confident that the battery will become an accessory element – the battery is not differentiating.”

While European buyers will rejoice that Nissan finally complies with the Combined Charging System (CCS), thus moving away from the Leaf’s ChaDeMo (and the V2G projects), the charging performance remains rather unimpressive in some variants. The smaller battery version vehicle comes with a 7.4 kW charger for domestic use. Only the stronger 87kWh variants include a 22kW 3 phase charger for home charging, although in Germany, Nissan already moved to include 22 kW in all options so we expect to see this in other markets too. However, the Ariya generally supports quick charging up to 130kW. That means adding about 360 km in range in half an hour.

In the design, Nissan, like many other carmakers, is aiming to transform the passenger compartment into a lounge as it reaches more autonomous and electric driving. The Ariya’s minimalist design language underlines the approach – the only haptic control elements are a pulsating start button. The digital dashboard – Nissan uses two consoles, one for the driver and one sizeable central display – remains hidden until the EV is switched on. Further functions enhance this Tesla-esque experience. The doors unlock when you approach the EV and all lights as well as the Nissan emblem switch on when detecting the driver’s presence.

Nissan also equipped the Ariya with its ProPilot 2.0 system. As in the Leaf, the assistance system enables what Nissan describes as hands-free single-lane driving (in theory) and also to navigate stop-and-go highway traffic and maintain set vehicle speed and distance to the vehicle ahead. An upgrade in the Ariya is the addition of Navi-link that includes road data and sensing technology and adjusts the driving speed accordingly. It also helps find a parking spot, although automated parking will only be available in some markets.

The highlights of the external design follow the previously presented version. Horizontal lines suggest motion. There is also the striking front section with notably thin headlights, wide front fenders and an illuminated front shield instead of the radiator grille. The concept also features short overhangs and a continuous rear light at the rear.

Nissan will produce the Ariya at its Tochigi plant near Tokyo. The factory will be “totally changed to accept the new platform,” explains Fioravanti. With Europe being one primary target market; however, it bears the question of manufacturing here. The only remaining facility in the one on Britain after Nissan had closed the Barcelona operation. Here Fioravanti remained vague, saying “Sunderland is our heart of European manufacturing facilities and the top of our priorities.” However, “we are awaiting the Brexit to expanding farther” – or not.

The executive would not go into detail on the expected sales volume when the Ariya reaches the markets in the second half of the next year and pre-sales starting in early 2021. “We won’t measure success through the sales,” he said. Instead, the Ariya will be considered a winner “if it can move the perception of the brand to be more modern”. This is also in line with the Alliance recent restructuring that is not to push volume but profitability. Still, Nissan wants to be the first mover and expect 50 per cent of electrified vehicles in Europe in future. The Nissan Ariya is one of eight electric models that Nissan is planning worldwide until 2022.

Prices of the Nissan Ariya have yet to be confirmed but will range around the 40,000 euro mark.

The electric SUV Nissan Ariya presented a few days ago could be followed relatively soon by a larger Nissan-SUV based on the same electric car platform. This is what Helen Perry, head of electric cars at Nissan Europe, hinted at in a conversation with Autocar magazine, although she did not give further details. Perry said: “The platform will be used for other cars in the future. The C-SUV and D-SUV segments are due to grow about 300% over the next three years, so we will look to use the platform in growth segments in the next few years.”

Using the CMF-EV architecture for other models is an obvious way to cover the investment in the platform. Given the role that the Japanese company has been given in the repositioning of the Renault-Nissan-Mitsubishi alliance, a larger E-SUV seems obvious: Nissan is in the lead for larger vehicles and is the leading market for the markets in China and the US – the very countries where demand for large SUVs is estimated to be particularly high.

Whether and when this larger electric SUV will come to Europe is not clear from the report. Perry says that even with the Ariya, “It all depends on the demand of the customer.”  She explained, “If we’d bought Ariya to market earlier, I’m not sure customers would have been ready for it. Technology wouldn’t have been as up to date as it will be at launch. And while Covid-19 has been terrible, it has made customers review what is important – for example, emissions.”

Nissan intends to additionally offer the Ariya in China towards the end of next year, as the manufacturer announced. The official presentation of the Nissan Ariya there will take place this month during Auto China. The Japanese company did not provide any details about technical changes such as the charging system in the brief announcement.

Reservations are now open for the Nissan Ariya electric crossover in the United States. Nissan also announced the preliminary 2023 Ariya reservation model lineup, specifications and initial MSRP – which starts at $45,950 for the Venture+ front-wheel-drive model. Pricing for additional Ariya models will be announced at a later date. Additionally, the first 10,000 reservations made before Jan. 31, 2022 will qualify for a two year free EVgo membership plus $500 in charging credits upon purchase.

Tesla to set up “tent” to make more Model Y