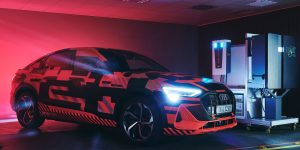 Audi has launched a joint research project with the Hager Group on bi-directional home charging. The test vehicle, an e-tron Sportback, is to be equipped with “near-series charging technology”.

In this project, the two partners are focusing less on charging on the grid at public stations and more “primarily on use cases in which homeowners use their own photovoltaic system to charge electricity they have generated themselves in a cost-optimised manner”. In other words: More “Vehicle to Home” (V2H) instead of “Vehicle to Grid” (V2G). The test environment was therefore designed accordingly and carried out in the garage of a private home with a photovoltaic system on the roof.

In the test network, the electric model was operated with a DC wallbox that enables a charging capacity of up to 12 kW, as well as a flexibly expandable home storage unit with a capacity of 9 kWh. In the event of a possible series application, this could provide additional flexibility, but is not a necessary prerequisite for bidirectional charging. Since both the home storage, the battery in the car and the solar system operate on direct current, the CCS connection is used via the DC wallbox and no inverter is connected in between.

The electric car should store the surplus of the PV system not used by consumers in the house – of course only if the car is also in the garage during the day and connected to the wallbox. Later on, the car can supply electricity back to the house again. With the electric car battery as an additional energy storage device, the energy costs for the household should be able to decrease as well as the owner’s CO2 balance.

“The battery of an Audi e-tron could supply a single-family home with energy for around one week independently,” says Martin Dehm, technical project manager for bi-directional charging at Audi. “Looking ahead, we want to make this potential accessible and make the electric car part of the energy transition as an energy storage device on four wheels.”

The core of the project revolves around suitability for everyday use. The customer should not have the feeling of having to restrict their mobility because of the electricity consumed at home and the power drawn from the electric car battery. “Customers, therefore, don’t need to restrict themselves in order to make bidirectional charging suitable for everyday use”, Dehm describes the focus of development. “The intelligent charging management manages the optimum use of the battery, thereby maximizing the cost-effectiveness of the overall system.”

For the moment, the developers have only made public statements on the possibilities and opportunities of V2H technology. Dehm says nothing about a possible series application although “near-series charging technology” is to be used in the project.

ABB to produce chargers in Italy