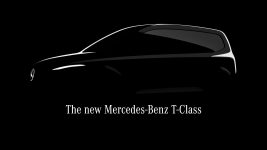 Mercedes-Benz has announced the introduction of the T-Class for the first half of 2022. This will be a compact van for private customers, which will be produced in cooperation with Renault-Nissan-Mitsubishi and will also be available in a purely electric version.

The T-Class will be the passenger car counterpart to the Citan, which is aimed at commercial customers. The Citan was previously based on the Renault Kangoo, which has repeatedly led to criticism of the van. In August 2019 Mercedes-Benz Vans had already announced a successor for the Citan that will be built again with Renault-Nissan but will contain significantly more Mercedes developments.

This should also apply to the T-Class, which is supposed to be aimed primarily at private customers – whereas the Citan, according to Daimler, is “uncompromisingly designed for commercial requirements”. In other words, similar to what the company has done with the mid-sized vans with the V-Class or the battery-electric version EQV and the commercial vehicle Vito. For the T-Class, the company names “family and leisure-oriented private customers” as the target group, who are looking for a car with an “attractive price-value ratio”. The new model is also to be used for sharing services.

So far Mercedes-Benz Vans has only published a drawn silhouette of the T-Class that does not give any details at all. So all that remains is the remaining information in the press release: that the T-Class is to offer “a large amount of space and a wide range of possible uses without compromising on comfort”. Both sides of the vehicle are to be fitted with wide opening sliding doors. As the German publication Auto, Motor und Sport writes, Citan prototypes were seen with both a classic tailgate and a split tailgate. It remains to be seen which of these versions the T-Class will receive, or whether both versions will be offered optionally.

The Stuttgart-based company has not provided any technical data on the electric drive in the current press release. German publication Auto Motor und Sport, suspects that the electric vehicle platform developed jointly by Renault-Nissan will be used, and that Mercedes will use this for a more independent vehicle. The report mentions a power output of 52 kW and a battery pack “which should offer a range of about 400 kilometres”.

Mercedes wants to avoid the criticism stemming from the vehicle’s proximity to the Renault Kangoo in the new edition of the two vans for private and commercial customers, especially in the car version. In terms of “design, value, safety and connectivity”, the new model is to have the “DNA of Mercedes-Benz”.

“With the new Mercedes-Benz T-Class, we will offer a vehicle which makes it possible for families and those with active pastimes to step into the Mercedes-Benz world,” says Marcus Breitschwerdt, Head of Mercedes-Benz Vans. “These customers seek attractive and practical compact vehicles – and it is precisely these demands which the new T-Class fulfils”.