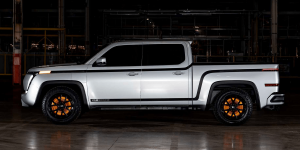 Lordstown Motors plans to go public on the US stock exchange Nasdaq through a merger with the investment company DiamondPeak Holdings. It is not the only American EV startup with such plans.

The company expects the IPO to raise around USD 675 million (EUR 573 million) in additional capital, which will be used for the development and commercialisation of the purely electric pickup truck Endurance. The company would thus be valued at around USD 1.6 billion (EUR 1.36 billion). Lordstown says the deal should be completed by the fourth quarter of 2020.

E-truck manufacturer Nikola Motor – which, like Lordstown, also wants to build an electric truck called Badger – had joined forces with the already listed company VectoIQ to be traded on the Nasdaq under the tag ‘NKLA’. Fisker also plans to go public by merger, in this case with the investment company Spartan Energy Acquisition Corporation. Fisker also wants to offer an electric pickup in a few years, as the company recently revealed in its model planning.

At least in Nikola’s case, the IPO has paid off in the short term. Since going public, the share price has risen by around 60 per cent. But all these companies do not yet have a product on the market or a profitable business model. Even if Tesla has awakened a certain eMobility euphoria on the US stock markets, the risk cannot be ignored for the startups. Tesla is now making a profit, but Nikola, Lordstown and Co. will not do so for a while yet.

Lordstown has also said that it has taken more than 27,000 orders for the Endurance since the presentation in June. Founder and CEO Steve Burns put the value of the pre-orders at $1.4 billion. Lordstown had already received around 6,000 advance orders since the launch: The Endurance is the result of the now discontinued W15 pickup project by  Workhorse, a company also founded by Burns. Lordstown has not only taken on the pre-orders but also some of the technology under license.

With 27,000 advance orders worth 1.4 billion dollars, this equates to around 52,000 dollars per vehicle And since Lordstown has said is only expecting an initial production of 20,000 vehicles per year, the first year’s production would already be sold out, provided the company can also convert the reservations into binding orders.

According to Lordstown, the advance orders are supposed to primarily from commercial fleet customers – the clientele for which the W-15 was once developed. The startup still plans to deliver the Endurance in the second half of 2021.

Update 29 October 2020: The announced IPO of the US start-up Lordstown Motors has now been completed following a merger with the investment company DiamondPeak Holdings. The Lordstown shares have been traded on the US stock exchange Nasdaq under the ticker symbol ‘RIDE’ since Monday. The proceeds will be used to develop and commercialise the Endurance all-electric pickup truck, which is scheduled to go into production in the second half of 2021.