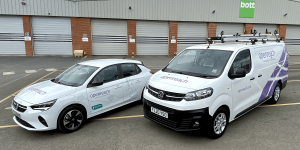 Opel’s sister brand Vauxhall booked another large order for electric vehicles. After British Gas had ordered 1,000 Vivaro-e in July, Vauxhall now reports an order from Openreach, one of the UK’s largest fleet operators, for 270 Vivaro-e and nine Corsa-e.

Openreach is the broadband and telephone network subsidiary of the telecommunications group BT. The parent company BT Group joined the EV100 initiative of the non-profit organisation The Climate Group in December 2018. The aim of the initiative is to electrify company fleets by 2030. The subsidiary Openreach is also a founding member of the ‘UK Electric Fleets Coalition’, a campaign also founded by The Climate Group with a similar goal.

“Today’s order is an important first step as we begin to make our fleet, the second-largest commercial fleet in the UK, fully electric,” said Clive Selley, CEO of Openreach. In total, the company’s fleet comprises 27,000 vehicles, including many vans for customer service, but also smaller cars. With this order, Openreach therefore only covers around one per cent of its fleet.

Just last month in July Vauxhall received an even larger order for the Vivaro-e when British Gas ordered 1,000 Vivaro-e. The company belongs to the Centrica Group, which joined the EV100 initiative in 2019.