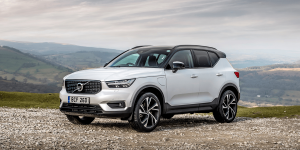 Volvo has introduced a new entry-level version of its XC40 Recharge Plug-in Hybrid that will cost British buyers less than 40,000 pounds when it arrives in 2021. Also new on the line-up are two mild-hybrid petrol variants of the Recharge T4.

Prices for the XC40 Recharge Plug-in Hybrid T4 start from £39,130. That means it qualifies to avoid the government’s £325 Vehicle Excise Duty surcharge (or ‘expensive car tax’), applicable to EVs priced from £40,000.

Volvo believes the Recharge T4 compact SUV will be particularly appealing to fleet operators and company car drivers as its low emissions rating makes the PHEV eligible for the 12% benefit-in-kind tax rating. A 20% taxpayer would hence pay as little as £78 per month, Volvo calculates.

The Recharge T4 is available to order in the UK with the first models to arrive on the Isles in October. Those wanting Volvo’s fully electric XC40, the Recharge Pure Electric P8, will have to wait until early next year to receive the right-hand drive EV.

Then to the mild-hybrid versions in the XC40 range that replace the T4 and T5 petrol engines. Running as the B4 and B5, the new mild-hybrid powertrains feature a belt-integrated starter motor that charges a 48V battery in recuperation to support the 2.0-litre petrol engine.

Kristian Elvefors, Volvo Car UK Managing Director, said: “The addition of a second plug-in hybrid powertrain and the introduction of our first mild-hybrid petrols to the XC40 range is the latest step in Volvo Cars’ ambitious electrification strategy.”

Said strategy, however, is to become more truly electric. As of 2025, Volvo wants electric cars to account for half of its worldwide vehicle sales, the rest by hybrid vehicles. This year, the Swedes are targeting that every fifth vehicle should have a plug-in drive.