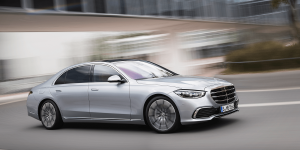 Mercedes has just presented the new generation of the S-Class in Sindelfingen, Germany. The luxury sedan will be launched with a 48-volt hybrid, with the plug-in hybrid with an electric range of up to 100 kilometres to follow in 2021.

Mercedes has so far released very little information about the electric car, only predicting an electric range of “around 100 kilometres”. A value that is strongly reminiscent of the 99 kilometres WLTP range of the Mercedes GLE 350 de, which is a diesel plug-in hybrid.

Mercedes also uses information on the mild hybrid sparingly. The three-litre in-line six-cylinder engine (M 256) has an output of 320 kW and is sold as the S 500 4Matic – in the predecessor model built since 2013, the S 500 of exactly the same power was equipped with a 4.4-litre V8. In the S 500 of 2021, the six-cylinder engine is supported by a small electric motor but in the ‘EQ Boost’, this delivers a full 16 kW. In addition to the boost function, the small electric motor should support the combustion engine in its power development and start the engine quickly and comfortably so that the start-stop function is almost imperceptible to the driver. A V8 engine with a 48-volt hybrid is still to follow.

In the table with the technical data Mercedes also lists an S 450 4Matic, which also uses the M-256 petrol engine but here limited to 270 kW. The consumption of both models is given as being 7.8-9.5 litres (S 450) and 8.0-9.5 litres (S 500) per 100 kilometres according to WLTP. A purely electric version of the S-Class as announced by competitor BMW for the 7 series, will not be available from Mercedes. Here, Daimler is relying fully on the announced EQS, which is to be built together with the S-Class on one line in the new Factory 56 in Sindelfingen.


Instead of talking about the drives, the German vehicle maker prefers to talk about the new smart home and interior functions of the MBUX system in the S-Class (the Mercedes language assistant will in future be able to control lamps, sockets, thermostats or shutters in the house from the car), how the MBUX system interprets and reacts to head direction, hand movements and body language, or that the aforementioned language assistant “Hey Mercedes” now supports 27 languages with Natural Language Understanding.

On the outside, the new-generation S-Class also follows the familiar concept of a short overhang at the front, a long wheelbase and a “balanced” overhang at the rear to achieve classic saloon proportions. The front is dominated by the radiator grille, although here the S-Class is somewhat more discreet than a BMW 7 Series or the current Audi A8. In addition to the status-emphasising appearance, driving comfort is always important in the S-Class. For an additional charge, the ‘E-Active Body Control’ is available here, which supplements the standard air suspension (by means of the 48-volt vehicle electrical system) so that the vehicle level is kept constant regardless of the load. On bad roads, the system can even recover a little energy by compressing the 48-volt actuators. In addition, the rear-axle steering with a steering angle of up to ten degrees is supposed to reduce the turning circle by up to two metres.

The fact that the S-Class is still a representative of the old generation of cars is shown by the fact that the number of installed control units has risen to over 100. After all, over 50 electronic components can be updated “over the air” with new software, including the MBUX, the driver display and the headlights. Mercedes offers a ‘Digital Light’ as an optional extra, in which each of the front headlights has three extremely bright LEDs and 1.3 million micromirrors. With a resolution of 2.6 million pixels, auxiliary markings or warning symbols can be illuminated more precisely.