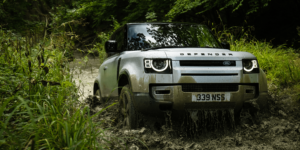 Land Rover has announced a new model year of the Defender, which JLR will offer as a plug-in hybrid for the first time. The 297 kW motor for the PHEV that sells under the name Defender P400e (for 400 hp) is already familiar from the manufacturer’s other models.

The plug-in hybrid Defender will feature a two-litre four-cylinder petrol engine and a 105 kW electric motor, as in Range Rover and Range Rover Sport. Both drives complement each other to produce the system mentioned above output of 297 kW and a maximum system torque of 640 Nm. The PHEV is only available as Defender 110, i.e. with the long wheelbase, customers can choose between five or six seats. Defender P400e’s maximum towable load is three tons, while the static roof load is 300 kilograms and the dynamic roof load is 168 kilograms.

The high-voltage storage unit has a maximum energy content of 19.2 kWh (net: 15.4 kWh), more than in the Range Rover (13.1 kWh). Land Rover states the purely electrical range at 43 kilometres according to WLTP. Since the electric motor is located in front of the automatic transmission, the Defender has permanent four-wheel drive even in electric mode and is entirely off-road capable according to the manufacturer. Thanks to the immediately available torque, it should be “even more capable” there.

The weight of the Defender and the poor aerodynamics of the angular off-road vehicle come at a price: at 85.3 mpg, the standard WLTP consumption for a plug-in hybrid is quite high, even when measured against the relatively large battery capacity. CO2 emissions are stated at 74 grams per kilometre.

Another change compared to the Range Rover P400e: While the Range Rover only has a 7-kW AC onboard charger, the Defender can also take direct current. The manufacturer states that using a 50 kW DC column should fill the battery to 80 per cent in just under 30 minutes – that would correspond to an average DC charging capacity of 25 kW.

The Land Rover Defender 2021 model year can be ordered immediately for delivery from January 2021.

The Velar P400e is based on Defender’s PHEV powertrain described above: the four-cylinder engine delivers 221 kW, the electric motor 105 kW. However, the battery in the Velar is slightly smaller, 13.7 kWh of the 17.1 kWh lithium-ion battery installed in the vehicle floor can be used effectively. On a DC charger, it should be possible to charge the battery up to 80 per cent in 30 minutes; on a 7-kW AC column, the charging process takes 1:40 hours to reach the same charge level.

Land Rover specifies the purely electrical range as up to 61 kilometres, the standard consumption is 2.3 litres per 100 kilometres (corresponds to 52-53 g CO2/km). Land Rover has not yet revealed the price of the Velar P400e. The 2021 model year vehicle is to be available for order from 1 October 2020 and will then be delivered at the beginning of 2021.