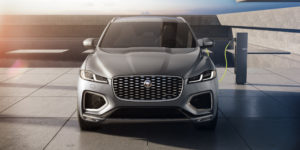 Jaguar has reworked their F-Pace and for the new model year is giving the SUV a plug-in hybrid version and mild hybrid technology for the first time. The PHEV variant is designated F-Pace P400e and should offer a standard electric range of up to 33 miles (53km).

Further details on the F-Pace P400e are given below: The all-wheel-drive part-time electric motor combines a two-litre, four-cylinder turbo gasoline engine with a 105 kW electric motor, resulting in a system output of 297 kW and a maximum torque of 640 Nm. The onboard battery has a capacity of 17.1 kWh, of which 13.8 kWh can be used effectively, and can be charged from 0 to 80 per cent in 30 minutes using DC rapid charging at 32 kW. Jaguar says that with a wallbox with 7 kW capacity, the same process takes around two hours.

In principle, the luxury car manufacturer has subjected the F-Pace to a thorough model update. The exterior innovations include a lowered hood, new LED headlights, redesigned bumpers, rear lights and a new grill. Jaguar has also revised the interior with a focus on “exquisite details and luxurious materials”. Digitally, the F-Pace has been upgraded with a new infotainment system (Pivi /Pivi Pro Dual-SIM) and an 11.4-inch curved glass touchscreen. In addition, over-the-air updates are now possible for the new model generation.

The Jaguar F-PACE starts at 52,800 euros gross and can be ordered immediately. The British company is aiming to launch it at the beginning of next year.