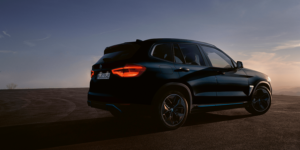 BMW has just revealed the launch specifications and prices for the BMW iX3 for the UK market, which is available to pre-order from today onwards. UK customer deliveries will commence in summer 2021.

The carmaker magazine Autocar suggests that a less expensive version may follow at a later date, but did not give further details as to sources. In July, when we revealed further details about the BEV, the German carmaker announced that prices for Europe would start at 70,000 euros, which is almost exactly the price currently stated in pounds.

BMW says that the high efficiency of the drive systems allow the new BMW iX3 to offer a range of up to 279 miles (450 km), according to the WLTP test cycle. The electric motor mounted in the rear generates 210 kW and offers the maximum torque of 400 Newton metres over a wide range. BMW specifies acceleration to 100 km/h in 6.8 seconds. The top speed is electronically limited to 112 mph (180 kph).

The iX3 is BMW’s first fully electric-powered BMW X model and overall the brand’s second fully electric model. On the superlative side, the BEV is the first BMW to be produced in China for export to key world markets. The iX3 is also the first of three new electric, i-branded BMW models coming to market within the next 18 months. Production will take place exclusively at a joint-venture factory operated by BMW and Chinese carmaker Brilliance in Shenyang, Liaoning. The joint venture BMW Brilliance Automotive (BBA) also just opened another battery centre at the Tiexi location in China, where the batteries for the iX3 are now being produced.

BMW says that the first UK customer deliveries will begin in summer next year.