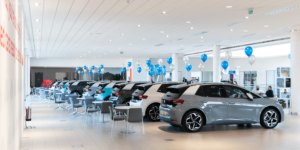 The first customers in the UK have now received their ID.3 1st Editions. Retailers across the country officially started delivery alongside a Grand Handover event at Volkswagen Cambridge that received the first MEB electric cars.

The handover comes just days after Volkswagen delivered the first ID.3 in Germany. The electric cars are 1st Edition ID.3 featuring a 58kWh battery for a range of 260 miles (420 kilometres), according to WLTP standard. Volkswagen claims a rapid charging capability of up to 100 kW – this means that 180 miles of range can be added in half an hour. Later versions will include other battery options as well.

Andrew Savvas, Volkswagen UK Managing Director, was at Volkswagen Cambridge for the Grand Handover event. He said: “Today we are seeing the first UK customers drive away in the ID.3 1ST Edition, the first Volkswagen Group product on the new MEB platform.”

He went a little into the history of Volkswagen, saying: “Some of my colleagues were there for this moment in 1974 when the first Golfs were delivered in the UK, and over 35 million have been sold since.”

The UK managing director thus drew a straight line from Volkswagen’s best-selling model, that’s the original Beetle, to what the manufacturer likes to describe as the new electric era. Obviously, the MEB platform will underpin numerous products across the Group in the coming months and years with the ID.3, and most recently the e-SUV ID.4 being only first in line.

The executive went on to say that “By 2029 the Group aims to sell 20 million vehicles based on the MEB platform. Today is just the beginning, and I can’t wait to see these ID.3s out on UK roads.”

The ID.3 is produced in Volkswagen’s Zwickau plant in the east of Germany.