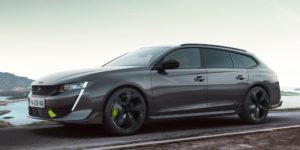 Peugeot has introduced the 508 PSE, the first in their announced range of performance-focused plug-in hybrid models. The 265 kW PHEV is to be available as a sedan and estate car from autumn.

The series version of the 508 PSE (for Peugeot Sport Engineered that replaces the GTI line) follows a concept that the French company had debuted at the Geneva Motor Show in spring 2019. Like the study, the model now on display is based on the well-known PHEV drive system of PSA’s EMP2 platform, which is also installed in the Opel Grandland X Hybrid4, among others.

Thus, the 508 PSE also has a temporary all-wheel drive, as the gasoline engine is combined with two electric motors. One motor is located at the front of the combustion engine, while the second is installed on the rear axle. The system output increases from 220 to 265 kW. But the 1.6-litre gasoline engine is still specified at 147 kW, and the output of the two electric motors (80 kW each for other PSA hybrids) is only slightly higher at 83 and 81 kW respectively. The increased system output is thus primarily due to a change in the way the three engines interact – the electric motors switch on earlier to support the gasoline engine.

This naturally has an impact on the other side: Peugeot claims to have an electric range of only 42 kilometres. This means that the 508 PSE has barely managed to qualify for the E license plate in Germany. The standard consumption is 2.0 litres, which corresponds to 46 grams of CO2 per kilometre.

The charging time at a household socket is specified as 7 hours, and four hours at a 3.7 kW charging point. A single-phase onboard charger with 7.4 kW is also optionally available. In this case, the charging time is reduced to 1:45 hours.

Peugeot does not only measure the sportiness of the new model in 45 kW more system power. For the more dynamic character, the tuning of the variable dampers (Comfort, Hybrid, Sport) has been adapted, and the track has been widened by 24 mm at the front and 12 mm at the rear. The front brake discs now measure 380 mm in diameter, and the 20-inch rims are also fitted with Michelin sports tires.

The 508 PSE build in Mulhouse, France, is available in only three paint colours: Selenium grey, Perla Nera black, mother-of-pearl white. All monograms are in black “to emphasize the model’s sportiness”. The 508 PSE will be available for order from fall 2020. Peugeot has not mentioned prices for the sports model yet.

“With the Peugeot 508 PSE we are starting a new era of sports models at Peugeot,” says Germany’s Managing Director Haico van der Luyt. The 508 PSE is currently the most potent production model of the French but is not expected to remain alone for long. In August, Peugeot announced that it would replace its GTi performance line, which had been discontinued in the meantime, with a whole family of sporty models with electric and hybrid drives – the PSE line. The 3008 PSE is probably planned as the second model, which will likely receive the PHEV drive of the 508 PSE. And apparently, Peugeot is also working on a sports version of the e-208.