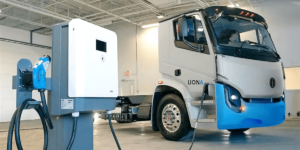 ABB has officially entered into a charging infrastructure partnership with Lion Electric. ABB will make its complete portfolio of charging solutions available to the Canadian electric commercial vehicle manufacturer for distribution in North America under the new Lion Energy division.

Lion Electric is best known in North America for its electric school buses. Based in Saint-Jérôme in the Canadian province of Quebec, the company says it has now delivered more than 300 fully electric school buses in the USA and Canada. In 2018, the manufacturer announced the expansion of its range to include a whole series of additional electric commercial vehicles. Since then, the portfolio has grown to include battery-electric trucks in weight classes 5 to 8, i.e. models with a gross vehicle weight from 7.2 tons.

Through the new service partnership with ABB, the new Lion Energy division will now offer ABB’s charging infrastructure embedded in a service package when vehicles are sold. This includes customer-specific consulting, planning and installation of the chargers as well as subsequent maintenance. ABB has indicated that it will also support its new service partner in the installation at end customers. “Over the past few years, Lion Electric has delivered hundreds of electric buses and trucks, and it has been a goal of ours to provide a complete turnkey charging infrastructure solution for our customers,” says Marc-Andre Page, vice president of commercial operations at Lion Electric.

While Canadian electric vehicle manufacturer Lion Electric was originally known for their electric school buses, their journey towards diversifying began with a Class 8 electric truck last year. Not that the company lost touch with their roots, however, as Lion Electric received a juicy contract for electric school buses from Transdev Canada shortly afterwards.  Their expansion into electric trucks was also quickly rewarded, as their largest contract yet came from the Canadian National Railway for a total of 50 battery-electric trucks. Now they also count international commercial giants such as Amazon to their customer base.