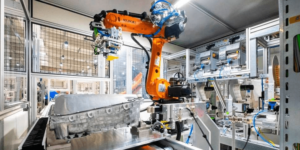 Tesla is reportedly interested in taking over the German company Assembly & Test Europe GmbH (ATW). ATW is based in Neuwied, not far from  Tesla Grohmann Automation, and is currently in the process of being wound up. Until now, ATW has also been active for German car manufacturers.

ATW has been part of the Canadian company ATS Automation Tooling Systems, and has produced battery assembly systems for BMW and Daimler/Accumotive, among others. As the portal The European now reports, ATW’s business partners were informed this week that they had “agreed to a takeover by a manufacturer of electric vehicles in California”. Tesla was not mentioned by name in the letter. In the industry, however, the rumour has quickly spread that Tesla is involved.

This is another indication that The European cites in the report: Already last Friday there was supposed to have been a celebration at ATW in Neuwied, where the takeover was toasted. As mentioned, the company is actually in liquidation, the 201 jobs were acutely threatened. At the celebration, “several Tesla vehicles” with the license plate “BIT” were seen in attendance. Tesla Grohmann Automation is located in the Eifel district Bitburg-Prüm.

The ATW management did not want to comment the information to the portal. However, the parent company ATS had already announced at the end of September that an agreement had been reached “to sell special company shares and to transfer employees of a subsidiary based in Germany to third parties”.


A purchase price is not mentioned in the article. Because of the current situation of the company, The European speculates that the takeover may have been “a bargain” for Tesla. In addition to battery assembly, ATW has so far also manufactured equipment for VW, its suppliers Magna (transmission assembly), ZF, Vaillant and Brose. The company, which was actually considered highly profitable, had got into economic difficulties due to the decline in orders caused by Corona.

It remains to be seen whether ATW will continue to accept orders from BMW, Daimler and Co. in the event of the Tesla takeover. At Grohmann Automation, formerly also an important supplier to German automakers, Elon Musk had terminated all contracts with previous customers. With the current expansion of production in Shanghai, Grünheide and Austin, ATW should not be short of work.

It is also odd that ATW, as part of the ATS Group, does not even have its own Internet presence. In the Wirtschaftsforum Neuwied, ATW describes itself as a “global machine and plant manufacturer for the automotive industry worldwide”. Its products and services include the development, design, manufacture, assembly and commissioning of production plants for the automotive industry as well as test systems for components and functional groups.