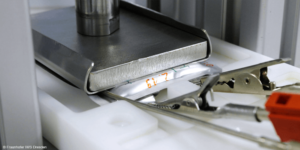 In Germany, Fraunhofer IKTS has just launched the research project called BattLife at the newly founded Battery Innovation and Technology Center BITC at Erfurter Kreuz. As part of the project, a digitised test centre for batteries and battery components will be established at BITC.

Earlier this year, Fraunhofer IKTS opened a branch office called the Battery Innovation and Technology Center (BITC) at Erfurter Kreuz. The new BITC is to “intensify existing collaborations with CATL,” said the German institute. The expanding Chinese battery supplier is currently building its first cell production facility outside of China at the Erfurter Kreuz industrial site and expects to have production running in early 2022.

In the project, which is properly called the Big Data Test Environment for Battery Life Modeling, the researchers want to work on new approaches to developing more accurate lifetime predictions and initiate further innovation processes that will extend the life of batteries.

The state of Thuringia is supporting the research project with five million euros. For this reason, BITC director Roland Weidl and CATT plant manager Jason Chen were on-site at the event, as was Thuringia’s Minister of Economics and Science Wolfgang Tiefensee. “In addition to good charging infrastructure, the service life of batteries is one of the most important prerequisites for making electromobility fit for the future,” said Tiefensee. BattLife thus makes an important contribution to the sustainable development of car batteries. But according to Fraunhofer, the project also represents “the beginning of an exemplary symbiosis of research and industry, for which the state has made enormous efforts over the past three years”.

According to Weidl, given the discussions about raw material extraction and recycling plans, extending battery life is crucial for the further development and acceptance of e-mobility. “We are now setting up a test centre that will analyse battery cells in industry-relevant quantities,” says the BITC director. “By cooperating with CATT, our results can once again flow directly into the production process.”

The Fraunhofer IKTS opened the BITC in July. The core concern of the new centre is the search for solutions for the networked, digitally supported production and quality assurance of battery cells and modules.