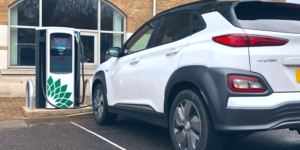 The €23 million infrastructure contract will see BP Chargemaster install over 1,000 charging points at 265 locations across Scotland. These are to include 35 ultra-fast chargers, which, although not specified, presumably means charging points with 150 kW or more. BP Chargemaster says it is the largest EV infrastructure contract in the company’s history.

“Police Scotland’s Fleet Strategy is highly ambitious, with the aim of having the UK’s first ultra-low emission blue light fleet by 2030,” says Deputy Chief Constable Will Kerr. “This substantial contract marks a major step towards that goal by making ULEVs accessible to more of our officers and staff.” ULEV stands for “ultra-low emission vehicle”.

This is not the first infrastructure contract from Scotland for BP Chargemaster: the company has already built 35 charging sites for the Scottish Ambulance Service, with 34 more sites still to be implemented. BP Chargemaster is working in collaboration with its partner WGM Engineering on both projects.

On the vehicle side, Police Scotland has commissioned Hyundai UK to supply around 180 Kona Electric cars. Deliveries are scheduled to begin this month and to be completed by March 2021. According to Hyundai, this is the 64-kWh version of the all-electric Kona.

This order from the Scottish police force is currently the largest all-electric Hyundai fleet in the United Kingdom – but not the only one. From the start of the lockdown in March until the end of August, over 200 new fleet contracts have been signed, according to Hyundai UK.