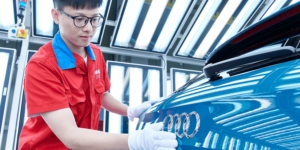 Audi and FAW have signed a Memorandum of Understanding for the joint production of electric vehicles based on the PPE platform, which Audi developed with Porsche. With FAW, the German Volkswagen brand wants to produce several purely electric Audi models for the Chinese market from 2024.

According to Audi CEO Markus Duessmann, who is also responsible for business in China, the decision underlines the strategic importance of the market in China. The letter of intent was signed during the German-Chinese Automobile Conference, which is currently taking place in Changchun, northern China. Changchun is also home to the FAW-Audi plant. Together with the second joint venture partner SAIC, Audi operates further plants in the south of the country.

Initial rumours about the upcoming joint venture became known at the end of September. Audi said at the time, and they would hold 75 per cent of the shares in the joint venture. There is no comment from Audi on this in the recent announcement.

The Ingolstadt-based company has not yet announced when exactly the new joint venture for the production of PPE-based BEVs is to start – the “new cooperation company” is currently “in the planning stage”. It is not yet known which models Audi and FAW will build on the PPE basis – allegedly, they were planning two models, internally referred to as E6 and EQ5. It has not even been officially decided which model Audi will build first in Europe on the PPE basis. At Porsche, it will be the electric Macan from 2022 as the company takes the lead.

Where exactly Audi and FAW intend to build the PPE electric vehicles and to which capacity is also not clear from the announcement. Werner Eichhorn, President of Audi China, described the decision: “This is a further milestone in our electrification strategy for the Chinese market. We are also confirming our commitment both to our longstanding Chinese partner FAW and to our activities in China, which we are now taking to a new level.”

According to Audi, the company plans to offer or localise further fully electric models of the e-tron family in China in the coming years. By 2025, Audi wants to achieve about one-third of its sales in China with electrified cars. Currently, Audi and FAW offer the Q2L e-tron as a BEV and the A6L TFSI e as a PHEV. Also, the e-tron quattro, which they previously imported, has been built in Changchun since September.

Audi produces within the FAW-Volkswagen joint venture at four locations in China, besides Changchun, there are factories in Foshan, Tianjin and Qingdao. This includes the SAIC-Audi plants.