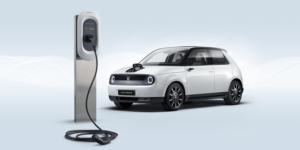 As part of the launch of the fully electric Honda e, Keba is now the exclusive supplier for the ‘Honda Power Charger’ wall boxes. The Japanese-Austrian duo jointly developed the charging station to match the vehicle design that was presented at the 2019 IAA.

In the UK, Honda opened the configurator for the Honda e in September, the basic version starts at £26,160. Now the offer has been rounded out with a home charging solution, the Honda Power Charger contributed by Keba.

The AC charger offers the usual charging capacities (7.4 kW single-phase or up to 22 kW three-phase). The Honda Power Charger is offered in the versions Standard, S and S+. The two premium versions allow, among other things, the integration of the wall boxes into smart home applications and the management of local load distribution. If several wall boxes are connected in series, the Honda Power Charger S+ serves as the master charging station.

According to an earlier communication from Honda, the Honda Power Charger is characterized above all by special control and safety functions. For example, the charger tries can restart the charging process up to five times if it is interrupted. Also, the owner can regulate the maximum charging amount based on a solar photovoltaic system, a home battery or a heat pump. Honda and Keba do not comment on prices and quantities.