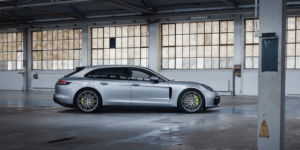 Porsche has added two more plug-in hybrids to the range of drive systems for the revised Panamera presented in August. In addition to the already familiar 4S e-hybrid, the Turbo S e-hybrid and the 4 e-hybrid will now follow.

The new Panamera models can be ordered immediately and will be available from dealers at the beginning of December. The Panamera 4 e-Hybrid is the weakest PHEV version in the large Porsche sedan, but still has a system output of 340 kW. This is followed by the Panamera 4S e-hybrid with 412 kW system power, which was introduced during the model update in August. The most powerful plug-in hybrid is the Turbo S e-Hybrid, which has now been introduced and has a system output of 515 kW. This makes the Turbo S e-Hybrid, with 700 hp in the old currency, the most powerful model in the entire series – so drivers who want to drive the top model, will have to buy a plug-in hybrid.

All three versions share the electric part of the drive train: the electric motor integrated in the housing of the eight-speed dual-clutch transmission produces 100 kW and offers a maximum torque of 400 Nm. Since the model update in summer, the battery has a gross capacity of 17.9 kWh. When the battery is empty, the Panamera can be charged two-phase with up to 7.2 kW. For charging, the Porsche Mobile Charger, a mobile charging station with household plugs and CEE32 adapter, is included in the standard scope of supply. A Mode 3 cable for charging at public charging stations can also be ordered.

Not only is the electric range greater thanks to the new battery, but the driving performance has also increased: In the Turbo S e-hybrid, up to 315 km/h (instead of 310 km/h) is now possible, and the sprint from zero to 100 km/h takes 3.2 seconds, which is 0.2 seconds faster than with the predecessor. Since the electric motor has remained the same with its 100 kW, the new data is due to the combustion engine: The four-litre V8 Biturbo has increased from 404 kW to 420 kW. The Panamera 4 E-Hybrid reaches 100 km/h from a standstill in 4.4 seconds (-0.2 s) and can reach speeds of up to 280 km/h (+2 km/h).

Prices for the Panamera 4 e-hybrid start at 110,369 euros in Germany, where the vehicle is launching on the market. The prices for the Turbo S e-Hybrid have not yet been entered in the Porsche configurator, but according to German motor vehicle publication Auto, Motor und Sport, the price is 185,537 Euro. All three PHEV variants can be ordered in three body styles: as a sedan, in the Executive long version and as a Sport Turismo with a station wagon rear.