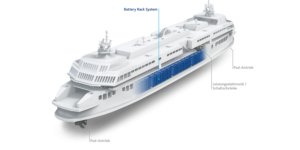 ABB Marine & Ports has selected XALT Energy to supply battery systems to power two hybrid ferries for the British ferry company P&O, which are expected to operate regularly on the English Channel between Dover in the UK and Calais in France from 2023.

The battery systems, which will supply the ferries with an output of 8.8 MWh per ship, will support the diesel engines on board. In ports, the battery solution will also enable the ferries to maneuver, dock and disembark without emissions. XALT Energy, a company of the Freudenberg Group based in Weinheim, Germany, describes the system as “one of the world’s largest battery installations in the marine sector”. It comprises 1,200 batteries distributed and networked in four battery rooms.

The ferries are built at the Guangzhou shipyard in China. ABB Marine & Ports is responsible for system integration and the supply of the electrical propulsion systems. The first ship is due to be delivered in December 2021, the second in April 2022, and regular operations on the route between Dover and Calais will start in 2023.

The agreement between the companies also includes the option to equip two additional ships with batteries from XALT Energy. The British ferry company P&O operates a total of 20 ships that, in addition to the above-mentioned route, also operate regularly between England, Scotland and Ireland, carrying up to nine million passengers annually on these routes.

XALT Energy has been a subsidiary of Freudenberg Sealing Technologies (FST) since December 2018 but is still headquartered in Midland, Michigan. In February last year, Freudenberg Sealing Technologies increased its stake in the US battery specialist XALT Energy from 31.8% to 50.1% and is now the majority shareholder of the Michigan-based company, that produces large-format lithium-ion systems for the commercial vehicle industry and has its own cell production facility. XALT batteries are also used in other applications, such as in city buses in New York and Los Angeles. In addition to battery technology, FST is also well-positioned in the fuel cell sector. The background to this is the acquisition of parts of the FC manufacturer Elcore, which the Group is pushing ahead with in early 2018.

“The future of shipping will be emission-free, quiet and powered solely by either battery electricity or hybrid battery-fuel cell systems,” says Nils Martens, Head of Battery & Fuel Cell Systems at Freudenberg Sealing Technologies. “Freudenberg can offer both types of systems to the marine industry and they will provide customers with exceptional power, stability and performance.”

With its battery and fuel cell activities, Freudenberg Sealing Technologies now intends to increasingly target other sectors in addition to heavy-duty transport (example: the 40-ton Energon). Last year, the company already initiated development projects for fuel cell buses and cruise ships with partners such as Newflyer, FlixBus and Meyer Werft.