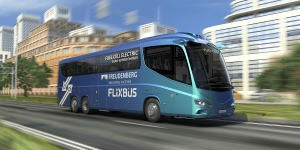 The long-distance bus travel operator Flixbus and the technology specialist Freudenberg Sealing Technologies (FST) intend to launch buses with fuel cells on the road in a joint project.

The partnership is also to be expanded to include a bus manufacturer. Initial discussions are already underway, as Flixbus confirms in a press release. Names were not yet mentioned, however.

The requirements profile of Flixbus for the new vehicles is much clearer: performance features such as acceleration should correspond to those of today’s Euro VI standard diesel-powered long-distance buses. Without refuelling, the fuel cell vehicles should cover at least 500 kilometres at a time and be able to be refueled in no more than 20 minutes.

“Following the successful launch of three electric long-distance buses, we now want to develop the first long-distance bus with fuel cell drive together with Freudenberg and set another milestone in the history of mobility,” says Fabian Stenger, Managing Director of Flixbus DACH. The company opted for electric buses from BYD and Yutong. These battery electric buses are used, for example, between Paris and Amiens and between Frankfurt and Mannheim. In the case of the fuel cells, the technology is to be developed in-house – and may also be used outside buses at a later date.

A hybrid system that intelligently combines battery and fuel cells is planned. In addition to long-distance bus transport, the drive will also be directly applicable to heavy commercial vehicles such as trucks. Initially, a representative bus fleet of 30 vehicles will be equipped with the system during the validation phase.

FST actually specializes in a wide variety of seals, including those used in combustion engines. Since seals play an important role with the extremely volatile hydrogen, the company says it has been developing fuel cells since the mid-1990s. At the beginning of 2018, FST also acquired a fuel cell manufacturer and acquired a stake in the American battery manufacturer XALT Energy – both important know-how for the fuel cell hybrid project.

To ensure that the project can be implemented quickly, the two companies are aiming for public funding within the framework of the “National Innovation Programme Hydrogen and Fuel Cell Technology” (NIP).