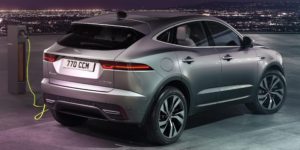 Jaguar is adding a plug-in hybrid to its smallest SUV model for model year 2021. The powertrain of the E-Pace P300e is already familiar from other Jaguar Land Rover models.

Following the purely electric I-Pace and the F-Pace with plug-in hybrid drive presented in September, the smaller E-Pace with the facelift now also has a PHEV option for the first time. In contrast to the larger F-Pace, the smaller SUV will not receive the hybrid powertrain marketed as the P400e with the 2.0-litre gasoline engine, but the P300e, which is the same one from the Land Rover Evoque and Discovery Sport series.

Jaguar Land Rover introduced this drive in April 2020. The powertrain is a transaxle layout: the combustion engine (a 147 kW 1.5-liter three-cylinder engine) is classically located in the front of the engine compartment, but the electric motor has not been integrated into the automatic transmission but is located separately from the combustion engine on the rear axle. The electric motor has an output of 80 kW, should be able to accelerate the vehicle up to 135 km/h in electric mode and provide an electric range of up to 63 kilometres in the WLTP City cycle. Jaguar gives the system output as 227 kW, which makes the plug-in hybrid the most powerful engine in the E-Pace.

The high-voltage storage unit is a 15 kWh battery installed in the underbody. Jaguar promises that the E-Pace PHEV will be able to cover the average distance of a British commuter (30.2 kilometres according to statistics) “effortlessly” without intermediate charging. Unlike some other PHEV models, the E-Pace can also be quickly charged at a DC charging station. A completely empty battery is to be charged to 80 per cent in 30 minutes; the charging capacity is 32 kW. Jaguar does not specify the AC charging capacity in the communication, but it should correspond to Land Rover models with the same battery: Only single-phase charging with seven kW is possible via AC, charging to 80 per cent takes around one and a half hours. At a household socket, it takes 6:42 hours until the battery is fully charged.

As part of the model update, the appearance of the E-Pace has also been slightly revised. The new bumpers are to be aerodynamically optimised, and the LED headlights also have a new daytime running light. In the interior connectivity has been further developed and the vehicles now feature the new ‘Pivi Pro’ infotainment system.

The market launch of the plug-in hybrid drive with the three-cylinder engine at Land Rover was not free of problems and the brand recently had to admit that the drive in the Evoque and Discovery Sport cannot meet the specifications for electric range and CO2 emissions promised in the spring in all versions. Sales of the two models therefore had to be paused.

By the time the E-Pace P300e is delivered in the spring of 2021, these problems should have been eliminated. All versions of the E-Pace can be ordered immediately, with prices for the P300e starting at 56,869.24 euros.