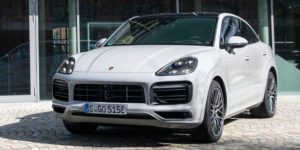 Porsche has increased the capacity of the high-voltage battery in the plug-in hybrids of the Cayenne. Thanks to optimised cells, the gross capacity increases from 14.1 kWh to 17.9 kWh, resulting in a range increase of around 30 per cent.

For the Cayenne e-hybrid, Porsche is now giving a WLTP city range of up to 48 kilometres; in the old NEDC, this would be up to 56 kilometres. For the Cayenne Turbo S e-Hybrid, the range is up to 42 kilometres to WLTP City and 53 kilometres to NEDC. The exact WLTP ranges depend on the selected equipment, tires and body shape (SUV or SUV-Coupé).

This means that in Germany, for example, all Cayenne E-Hybrid models meet the requirements for the E license plate as well as the reduced company car taxation in accordance with the range criterion currently valid in their home country. Due to the excessively high base price of at least 90,447 euros gross (i.e. around 77,970 euros net), all plug-in hybrids from the Cayenne model series do not qualify for Germany’s environmental bonus.

The battery update does not change the performance data of the two PHEV variants. The electric motor integrated into the housing of the eight-speed automatic transmission delivers 100 kW and offers up to 400 Nm maximum torque. In the Cayenne e-hybrid, it is combined with a 250 kW V6 petrol engine, resulting in a system output of 340 kW. In the Turbo S e-Hybrid, a 4.0-liter V8 engine produces 404 kW, while Porsche indicates a system output of 500 kW.

Porsche had already switched production to the new model year in mid-October. This means that all plug-in hybrids of the Cayenne that can currently be ordered already have the larger battery. In the summer, we subjected a Cayenne Coupé e-hybrid to a range test with the 14.1 kWh battery available at that time. The update for the SUV series is analogous to the Panamera sedan where the plug-in hybrids have already had the battery with 17.9 kWh gross since summer, although the performance data here differs slightly. The Panamera 4S e-hybrid (412 kW system power) is a version of the plug-in drive that is not available in the SUV series.

Jaguar E-Pace to release as PHEV in 2021