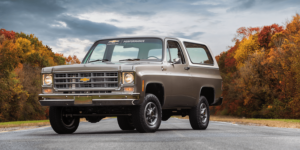 Starting in the second half of 2021, General Motors plans to sell an electric drive kit for hobbyists with components of the Chevy Bolt, which will enable them to convert conventional cars into electric cars.

These include a 147 kW electric motor and a 60 kWh battery, as well as an AC-DC inverter, DC-DC converter, wiring harness and components for the battery air conditioning. The solution was actually supposed to be presented at the tuning fair Sema, but the announcement was now made digitally, just like the fair itself.

To demonstrate the capabilities of the kit, General Motors installed the engine in a 1977 Chevrolet Blazer. With this, the American company chose a particularly thirsty model for electrification: The Blazer K5 offers only two seats, but with its 6.6-litre V8, it hardly gets less than 20 liters/100 km. Nice side effect: With the kit, the top performance of the Blazer is higher. The V8 of the year of manufacture 1977 came only on 130 kW.

By focusing on hobbyists and tinkerers, General Motors does not mean screwing in the garage at home; the work should be carried out by certified specialist companies, not just because of the high-voltage training, but also because of the conversion of safety-relevant parts. For example, the brake system with the hydraulics must be converted to an electric system with a vacuum pump or electric actuator, and the same applies to hydraulic power steering.

Smaller companies that otherwise carry out other tuning modifications on combustion engines can also qualify as such companies. In fact, the kit offers potential for more beautiful solutions than in the Blazer, as the 60 kWh battery was mounted quite clumsily on the charging area in the demonstrator.

Despite these conditions or restrictions via the certified specialist companies, General Motors deems the ‘Electric Connect and Cruise package’ commercially worthwhile. The demand for such a system is high enough, they said, and it also involves components that are being phased out in new cars. However, the new Ultium batteries and electric motors from the ‘Ultium Drive’ kit are not offered in the retrofit solution.

Such retrofit solutions are not new; companies such as Karabag or eClassics (with approval from Volkswagen) already offer such solutions and retrofit existing vehicles and classic cars. However, it is unusual for a car manufacturer to offer such a retrofit kit for sale.

Honda joins CO2 pool of Tesla and FCA in Europe