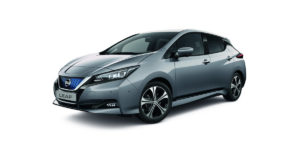 The Nissan Leaf is undergoing some upgrades for the new model year. The Leaf MY20 version has been in production since mid-November and, according to the Japanese company, will be rolling into dealerships “very soon”. Prices for the Nissan BEV start from 29,233.95 euros.

You find all updates to this article below.

The Nissan Leaf MY20 is the latest version of the second-generation vehicle unveiled in 2018, available in two battery options – 40 or 62 kWh. Features now introduced include an optional Wi-Fi hotspot and blind-spot assist as standard. Four data tariffs from the telecommunications provider Orange are available for the hotspot. Blind Spot Assist also keeps the Leaf in its lane if necessary. In the top Tekna trim, Nissan is also introducing an intelligent interior mirror with camera function.

The innovations are rounded out by a telescopic steering column adjustable in depth and height (standard), the new Ceramic Grey paint option, and expanded functions for the NissanConnect Services smartphone app. Thanks to these, in future it will not only be possible to monitor the charging process remotely and activate the air conditioning, but also to lock and unlock the doors via smartphone. Users can also set up so-called smart alerts: These notifications inform the driver as soon as the vehicle leaves a predefined zone or exceeds a certain speed.

Just a few days ago, the Leaf celebrated its tenth anniversary. Since 2010, Nissan has sold more than 500,000 units of the vehicle in 59 markets worldwide. The Leaf is built in Japan, the USA and the UK.

Update 13 December 2010: In the UK, Nissan builds the Leaf at the Sunderland plant and has seen strong sales since starting production there in April 2013. The company just announced it sold Leaf number 40,000 in Britain with the UK being one of Nissan’s fastest-growing EV markets. It is responsible for over one in five Leaf sales in Europe, according to the carmaker.

Sunderland started producing the new model year Leaf on 16 November for the UK market as reported. The changeover came with price reductions so that the top trim Tekna with its large ‘e+’ battery now starts at 34,710 pounds (1,685 pounds less than before).