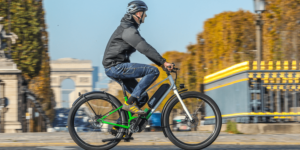 The French automotive supplier Valeo is now adapting its 48V systems for electric bicycles. The supplier is launching a solution in cooperation with Effigear that combines a 48V electric motor with an adaptive seven-speed automatic transmission.

Valeo calls it the “most powerful e-assist system for bicycles to date,” with 130 Nm of torque that can amplify the cyclist’s physical power input eightfold. Current systems are often equipped with 24V or 36V motors and offer at most a five-fold amplification of power, the French company says. On a cargo bike, the new 48V system is said to be able to help a cyclist weighing 150 kg climb a 14 per cent incline (such as a parking lot ramp) forwards and backwards without breaking a sweat.

What Valeo says is a world-first for electric bikes, the adaptive automatic transmission uses an algorithm to adapt the e-assist system to the driving style and route. The gears are changed automatically. The drive system, reimagined by Valeo and Effigear, is said to eliminate the need for 50 parts of electric bicycles, some of which are vulnerable. There are no longer derailleurs, sprockets, handlebar gears with their associated cables, or a traditional bicycle chain, the manufacturer says. The latter can be replaced with a clean belt system. Other features Valeo advertises include an anti-theft device integrated into the system, a push assist and a boost function.

The French company says they do not want to produce their own bicycles, but rather offer manufacturers of e-bikes a solution for the electrical support of their models. For demonstration purposes, Valeo has developed three prototypes: a city bike, a mountain bike and a cargo bike, which will have a distinctive reverse function and a brake energy recovery function.

“One of Valeo’s key strategic focuses is accelerating its expansion in the emerging markets for new “zero-emissions” mobility, including electric small city vehicles, electric motorcycles and scooters, last-mile autonomous delivery droids and electric bikes,” says Valeo CEO Jacques Aschenbroich. “To do this, we are leveraging and adapting the technological platforms that we developed for the automotive industry – both those dedicated to ADAS (advanced driver assistance systems) and to low-voltage electrification (48V).” Aschenbroich explains that Valeo has very high production capacities and significant economies of scale, which he sees as a major trump card of this strategy: Valeo produces around 30 million e-machines every year, he says.