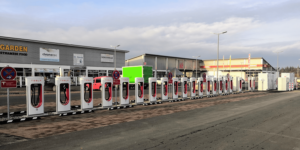 In Germany, Tesla has expanded the Supercharger site at Westerwaldpark near Oberhonnefeld by 20 charging stations of the latest generation V3. This makes the charging park with 20 V3 and 20 V2 Superchargers the largest in central Europe.

The Westerwaldpark near Oberhonnefeld in the Neuwied district in the north of Rhineland-Palatinate is located along the main A3 traffic route between Frankfurt and Cologne. In addition to various offers from the gastronomy sector, the location also offers stores from the food, clothing and technology sectors.

Other V3 locations have already opened in Wismar and Hermsdorf, in Erharting and Eschborn, and on the Euref campus in Berlin, among others. In addition, the Seed & Greet fast-charging park at Kreuz Hilden is partly equipped with V3 chargers. Incidentally, Tesla put the first Supercharger site in the EU into operation near The Hague in the Netherlands in the summer.

The European V3 Superchargers look similar to the V2 version, but only a thinner CCS cable is installed – instead of the Type 2 DC cable and the CCS cable for the Model 3, most of which was additionally retrofitted. In Version 3, the Superchargers enable charging powers of up to 250 kW, while the V2 chargers in the last expansion stage were at 150 kW.