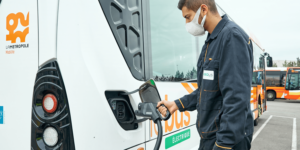 The Jakarta governor’s goal is for at least 50 per cent of Transjakarta buses to be electric by 2025 and all by 2030, according to a report in The Jakarta Post. The newspaper quotes Candra Rakhmat, head of facilities planning at Transjakarta, as saying that the 100 electric buses planned for 2021 would account for three percent of the total fleet.

But the company does not expect all buses to be all-electric by 2030, according to documents Rakhmat is said to have used at a presentation in December. Transjakarta does aim to reach the 10,000 electric bus mark by then, but according to the material, that would represent only 83 percent of the fleet. The rest will still consist of diesel buses painted orange and CNG buses painted blue – the electric buses Transjakarta has used so far as part of a pilot project are painted white.

According to the report, Transjakarta does not intend to buy the electric buses, but will use them through a “buy-the-service program” in which the company pays the bus owner per kilometer driven. It is not clear from the report which models Transjakarta plans to use or which suppliers plan to participate in a tender based on this model.

Jakarta is one of the cities with the highest air pollution levels in the world, and this is now to be reduced. According to Governor Anies Baswedan, more than five million cases of illness per year in the city are due to air pollution, costing more than 390 million euros annually.