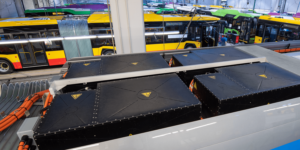 In a joint project with Impact Clean Power Technology and TAURON Polska Energia, Polish electric bus manufacturer Solaris is exploring the secondary use of lithium-ion cells as energy storage devices in stationary applications.

For the construction of the prototype system, which will be built as part of the ‘Second Life ESS’ project, Solaris will hand over batteries with a nominal capacity of 160 kWh used in the electric bus of operator PKM Jaworzno. PKM Jaworzno was one of Poland’s first public transport operators to rely on electric buses – today, 23 e-buses are on the road with 20 more ordered in spring 2020.

Solaris says that the first electric buses they delivered in 2011 have now covered more than half a million kilometres. In some cases, the batteries need to be replaced after this mileage. “In the course of use and over time, the capacity of the batteries decreases. In simple terms, a battery in an electric bus is considered worn out when its capacity falls below 80 per cent,” says Łukasz Chełchowski, director of Solaris’ development office. “However, it is still perfectly suitable to be reused as energy storage in stationary applications.”

That is exactly what the batteries in the project will be used to test. They will be used both as buffers for renewable energy and to stabilise power grids. Solaris says that the development and construction of the test facility are expected to be completed by 2022.

The research project, called ‘Second Life ESS,’ is being implemented in cooperation with the National Center for Research and Development (NCBiR). Work on the development of the prototype system is scheduled for completion in 2022.