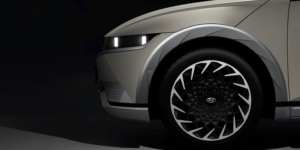 Hyundai provides an official preview of the highly anticipated Ioniq 5 and unveiled the first design elements and technologies of the electric crossover,. After the digital debut in February, it will be possible to pre-reserve the 800-volt electric vehicle before it celebrates its market launch in Europe in summer 2021.

It is clear at first glance that the production model of the Ioniq 5 will also retain the angular design language of the ‘Concept 45’ shown in 2019, thus pursuing a completely different design than, for example, the Ioniq, Kona or Nexo. The Ioniq 5 is characterised by clean lines and angles, not only in the striking daytime running lights but the entire body.

In the front view of the sparsely lit car, the small exterior mirrors also stand out; depending on the market, cameras will probably be used here. Hyundai has opted for an approach similar to Audi’s e-tron, in that the cameras are placed roughly where the mirror would be. Honda, for example, has opted for a position close to the car body for these.

In contrast to the study, the headlights – or rather the radiator grille-like design element at the front – extend a bit further toward the front wheel arches at the side. Overall, the Ioniq 5 has remained very close to the study, especially in terms of proportions with the long wheelbase and short overhangs. This was also evident in a recent shot from Australia, where a sparsely taped prototype of the Ioniq 5 was photographed at a charging station.

The pixel graphics of the headlights and taillights are not because other LED technologies with a continuous light pattern cannot be mastered or purchased, but rather because the so-called ‘Parametric Pixels’ were chosen by the designers as a central element. Hyundai says that these are not only meant to be an expression of the vehicle’s “advanced digital technologies” (which Hyundai is not naming ahead of the world premiere) but also to bring together the analogue and digital design components.

“IONIQ 5 presents an all-new customer experience through innovative EV design that is evocative of the icon that established Hyundai’s design DNA,” said SangYup Lee, head of Hyundai’s Global Design Center. “Beginning with IONIQ 5, our dedicated BEV lineup brand will redefine the relationship between people and their cars, establishing a new standard against which all BEV design experiences will be measured.”

Hyundai has not revealed further details on the Ioniq 5’s technical specifications at this point in time. What is already clear, is that the car will be the first model to feature an 800-volt system on the newly developed E-GMP (Electric Global Modular Platform) platform, which should allow it to recharge electricity for 100 kilometres in five minutes. In addition, the E-GMP vehicles will have bi-directional charging capability and will also be able to provide external sources of 110- or 220-volt AC power from the traction battery.