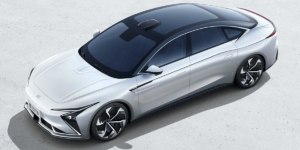 SAIC and Alibaba have moved fast to install their electric car joint venture. Zhiji Auto presented the first two models under the IM label for “Intelligence in Motion”. Battery cells come from CATL.

That Alibaba had set up an electric car joint venture called Zhiji with China’s largest carmaker SAIC and Shanghai’s Zhangjiang Group made the news shortly before Christmas. Only weeks later, the two giants moved to debut an electric sedan and an e-SUV.

The new EVs will bear the IM label. IM also signifies “Zhiji Motor” in Chinese and indicates that AI is at the heart of the developments, according to SAIC. Alibaba will sign responsible for AI technology and Big Data. SAIC will take on manufacturing and is again moving fast. They want to open orders for the sedan this coming April at the Shanghai Auto Show. In 2022, the electric SUV will hit the market, shortly after deliveries of the sedan.

The companies have yet to specify the new models fully. Reports suggest the IM cars will feature energy-dense batteries from CATL and NVIDIA Drive tech for autonomous driving.

SAIC says a 93 kWh battery comes standard, while a 115 kWh battery will also be available. With the latter, the sedan will claim a range of up to 543 miles (874 km) in the NEDC cycle. The battery has been described as “silicon-doped lithium supplement battery cell technology” and IM Motors said the batteries’ energy density will be 30 to 40 per cent more than current models. China Daily also suggests wireless charging as a standard and must refer to Chinese language media. There are further reports of two electric motors for an all-wheel-drive with a combined output of 400 kW. This would enable the sedan to accelerate from 0-100 km/h in 3.9 seconds.

In an interview with local media, Liu Tao, the co-CEO of Zhiji Automobile, said the IM brand was there to “kill” Tesla. Looking at the current market and design, the positioning suggests another competitor though, Nio ET7. The EV was unveiled on 10 January online.

The IM sedan’s renderings show a 5,000 mm long model, 1,960 mm wide and 1,485 mm high. Like the Nio, the IM EV has a large glass roof. The inside features large screens and reports point out NVIDIA’s high tech autonomous driving features. These include three lidars and 15 high definition cameras. When the IM cars will largely self-drive depends on government approval.

The involvement of big tech in electric mobility has flared up again in recent months. Apple appears to renew its engagement, possibly with Hyundai on the vehicle front. Alibaba rival Baidu appeared to be flirting with Geely to start building electric cars. Geely also just moved with long-time Apple supplier Foxconn into a partnership to offer contract manufacturing and consulting in e-mobility. Besides, Didi Chuxing cooperates with BYD to produce electric cars for ride-hailing services. The list of course also includes Google’s Alphabet or Amazon renewing their engagements in transport.