BEVs accounted for around 1 million vehicles in this market – an increase of 16.1 per cent compared to 2019, while sales of PHEVs rose by 9.1 per cent to 247,000 units. The share of both vehicle types climbed to 5 per cent (BEVs) and 1.2 per cent (PHEVs) of the total sales market, which itself shrank by 6 per cent to 20.18 million passenger cars and light commercial vehicles. The CAM states that demand in the world’s largest vehicle market has declined slightly for the third year in a row. 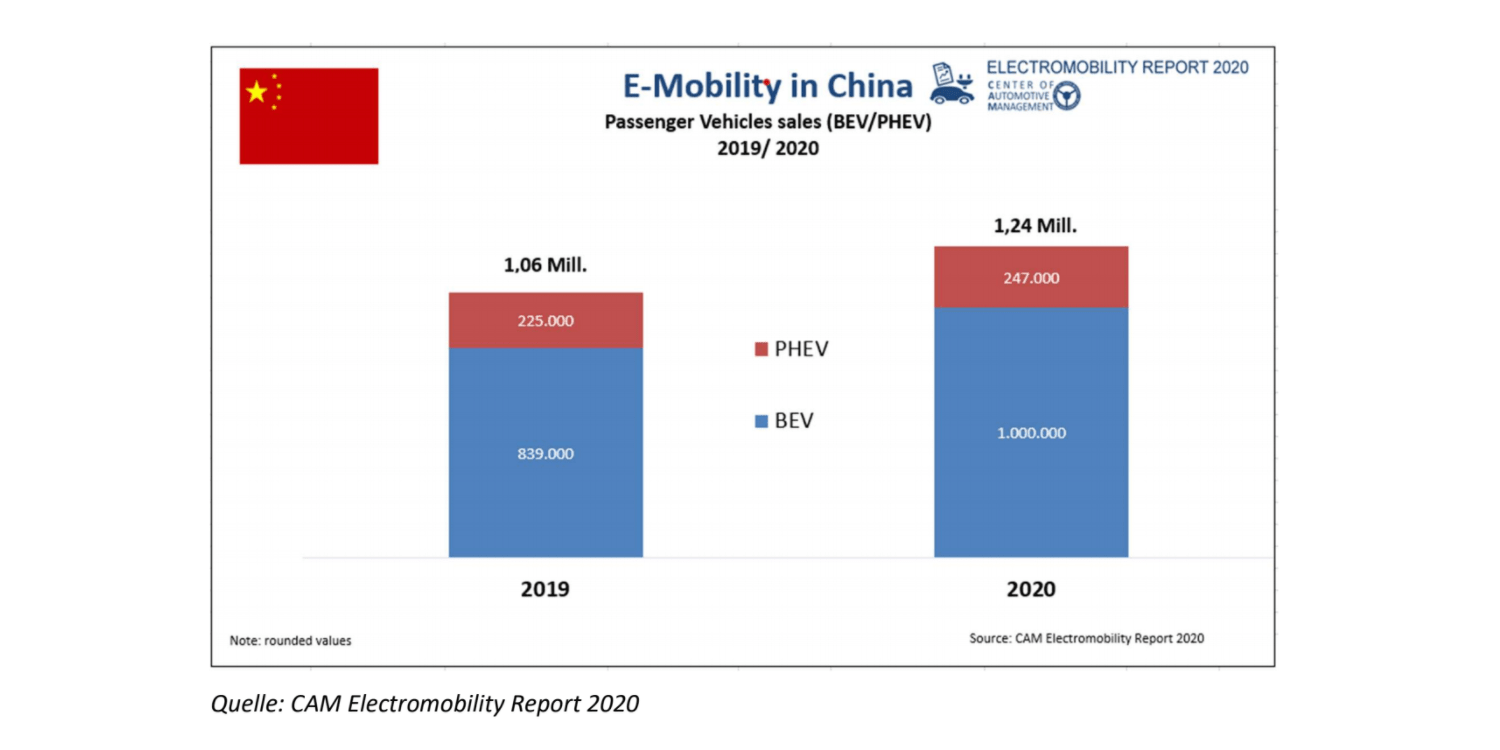 Let’s move on to the market leader in electric vehicles in China: this was Tesla in 2020 with more than 137,000 Model 3 vehicles sold. At this point it should be said that the market leader in this study was identified by most sales of an electric model, but BYD sold more electrified vehicles (BEV & PHEV combined) in total, with 189.689 BEVs and PHEVs combined. BYD’s most successful NEV model is the BYD Han. In November 2020, sales of the flagship vehicle surpassed 10,000 units for the first time. In addition, BYD announced it had built the 20,000th Han EV at its Shenzhen plant, also in November.

Regarding Tesla’s numbers, the authors of the report cite the China Passenger Car Association as their source. According to their estimates, the Chinese market is already responsible for around 30 per cent of all Tesla sales worldwide. These amounted to 495,550 vehicles in 2020. The American manufacturer is benefiting in China primarily from sales of the Model 3, which has been produced locally since the end of 2019. For a few weeks now, the Model Y has also been produced locally (and delivered since 18 January).

“China is increasingly becoming the lynchpin of the transforming automotive industry,” sums up study director Stefan Bratzel. “China is not only the largest global car market that has come through the Corona crisis best in a comparison of market regions. The country is at the same time the most important market for electric vehicles, which represents an entry into the premier league of global car manufacturers for new players. In addition to Tesla, domestic players such as Nio, BYD or Xpeng, in particular, are showing tremendous momentum in the new topics of the future.”

Our other reports on evaluations by the Center of Automotive Management can be found here.

Thomas Ulbrich stays with VW after all